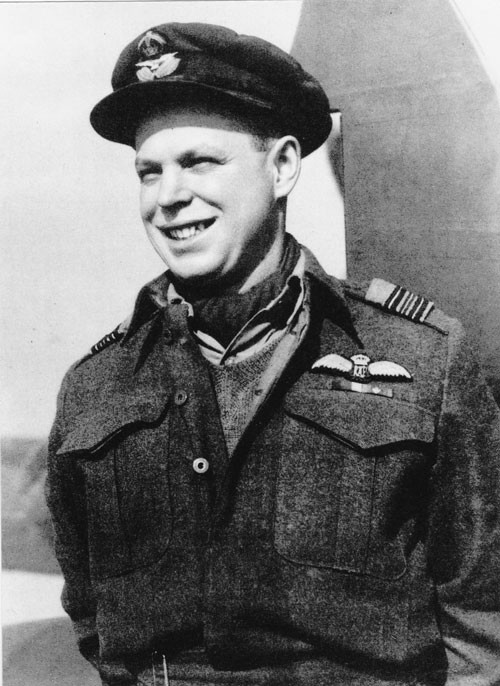 Readers will enjoy this riveting narrative of how a Jewish boy from Hamilton realized his dream of becoming a pilot, was shot down in France and evaded the Nazis to reach Gibraltar, then returned to lead airmen in war.

In a revealing account of his exceptional RCAF career, Group Captain David Goldberg goes beyond typical military history to examine many dimensions of warfare and its psychological effects on pilots. Goldberg (1917-2006) told his story to Hamilton author David S. New in a series of 15 three-hour, tape recorded interviews.

This lively, fast-moving account ranges from the thrill of flying to the ever-present horrors of war. The emotions and loneliness of being a wartime commanding officer tested Goldberg to the limit but he won his personal battle of attrition.

Goldberg had empathy for the pilots under his command and inspired them with his combat leadership. His vivid memory and thought-provoking observations make for a compelling book from start to finish.

While Goldberg faced many tense episodes, none were more challenging than being shot down by ground flak at low altitude while attacking a Luftwaffe airfield in his beloved Spitfire IX on March 8, 1944. It was his 80th operation.

As he described it: “The ground comes up fast. There’s an abrupt thud, then prolonged scraping and screeching—the sound of a thousand fingernails moving down a blackboard. My speed drops quickly to a softer skidding sound. Hold on, baby. Hold on. No smoke. No flames. I’m okay! I’m going to live!”

The Spitfire flipped onto its back. Goldberg just managed to inch his way out of the cockpit and burned the aircraft before the Germans could capture it. Tired, cold and hungry, he avoided detection with the help of the French underground. Life as a Jewish fugitive on the run was a nerve-wracking, cloak-and-dagger ordeal. He encountered a host of characters, from strangers who were willing to risk their lives to a mysterious bearded man “straight out of a Hollywood spy movie.”

Living with the constant fear of being turned over to the Germans, Goldberg fortuitously made it out of France with a larger group of downed airmen over the arduous Pyrenees Mountains to Spain. He finally arrived in Gibraltar two months after being shot down and was able to get word to his family that he was alive.

Goldberg sailed home to Canada for 30 days’ leave and a family reunion. Upset by people complaining about relative trivialities while the war was on, he wanted to “get back to the boys” overseas.

He was worried that he might never again fly in combat. After using the French underground system, Goldberg would be considered by the “brass hats” to be a security risk should he be captured by the enemy.

Goldberg, however, was posted to Italy and the only RCAF squadron in the Desert Air Force. Excelling in dive bombing and strafing sorties, he rose to commanding officer of 417 Squadron. In 1945 he was awarded the Distinguished Flying Cross for outstanding courage and skill in dangerous ground attack.

Ironically, Goldberg never downed a single German aircraft. A sensitive man, he abhorred killing. Only once did he claim a life and it left a painful memory.

“That starkly vivid image would remain with me for the rest of my life,” he reflected.

Goldberg didn’t see himself as a hero. He gave the credit to everyone who laid their lives on the line, including those who served in the background: the men and women of the French underground and the merchant seamen who transported troops in the perilous, submarine-infested North Atlantic.

Though he saw the cruelty and chaos of war, Goldberg felt the esprit de corps and camaraderie of the air force made all the difference. The joys of being a pilot gave him the experience of a lifetime, many times over.

“The war made me more tolerant, expanded my horizon,” he recalled. “I learned that people are more alike than different. I saw people ignore class and ethnic distinctions, disregard stupid prejudices, in order to co-operate and accomplish something.”

Throughout the book, Goldberg’s talent for drawing in the reader leaves a strong impression. Consider, for example, his excitement when flying the Spitfire.

“In my mind I was at the Battle of Britain… A flash of fire from the exhaust stubs, blue smoke, black smoke, bang, bang… a thundering crackle, the smoke banished as she catches. A tremendous roar, a torrent of wind from the propeller presses the grass back as she catches. She’s alive! And I was alive, more alive than I’d ever been.”

Hollywood could not write a better script.

Gord McNulty enjoyed a 38-year career in journalism as a reporter and editorial writer. He retired from The Hamilton Spectator in 2006 and is an active volunteer with aviation and environmental organizations.

View a 2008 interview with the late David Goldberg for the Jewish Hamilton Project: