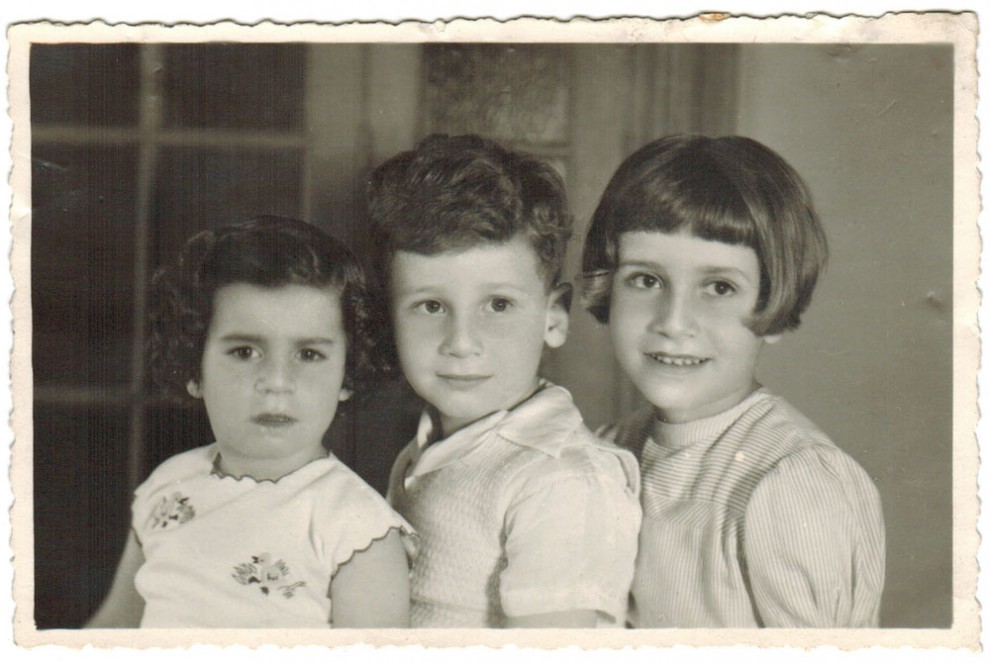 “When will I get clothes for school?” I asked my sister, Vivi, excited to be going back to the Lycée Française de l’Union Juive with her and my older brother. I was seven years old and eager to continue learning Arabic and Hebrew at the French school, a private Jewish institution in Alexandria, Egypt.

All four children and our nanny, Sowad, were in our bedroom — a carpeted room with five beds and some dressers that we shared with Sowad. The light shone into the high-ceilinged room and Alexandria’s street noises filled the space. Sowad’s dark face glowed at the notion of being left to mind only one child, my three-year-old brother, Riri.

The heavy living room and dining room drapes were drawn to keep the unrelenting sun off the Turkish rugs and the oversized furniture that filled the rooms. These were adult places, where my parents entertained family and friends, setting up tables for games of cards.

In the kitchen, the cook and his helper, Ibrahim, were noisily preparing a meal, crashing pans and chopping vegetables. Ibrahim was a trusted employee and my parents routinely gave him money to do the food shopping and to run other errands.

The large table at the centre of the kitchen was covered with rice, chicken and fresh, colourful produce — purple eggplants, tiny okra, long green beans, mangoes, fresh figs and dates. An aroma of cumin and lemons permeated the apartment. The shopping had been done and the bread bought that morning from a street vendor who took the money from a basket we lowered on a rope, in exchange for the pita that we then reeled in. We would eat lunch as soon as my father returned from his shop and my mother from her errands.

Outside our apartment, the world was changing. A few weeks earlier, on July 26, 1956, the new president of Egypt, Gamal Abdel Nasser, had given a speech declaring his intention to nationalize the Suez Canal. The Canal had been built with the assistance of the French and English governments, and they controlled the navigation. Nasser wanted Egypt to be the sole monitor and specifically wanted to disallow Israel from using the Canal. He made the case for Egypt’s claims: “We shall not let imperialists or exploiters dominate us. We shall not let history repeat itself once more. We have gone forward to build a strong Egypt. We go forward towards political and economic independence…”

Concerned about the growing Soviet influence in the Middle East and the prospect of war, the Western powers were distressed, but divided in their response to the ‘Suez Crisis.’

Oblivious to these political issues, I happily started school. My Nono and Nona, my mother’s parents, continued to have us over for dinner, along with all the others cousins. The nine of us would play and squabble as our parents sipped Turkish coffee and chatted about people and places. More and more frequently, we became aware of the tension in our parents’ discussions.

“But, what are we going to do? Do we need to leave this country?” my aunt would ask.

“No, no!  It will be all right. All of this will blow over. They will come to some agreement. Anyway, where would we go?” her husband answered.

“After all, we are Egyptians. We were born here. What would we do with our businesses? It isn’t a good time to sell,” my father interjected.

By the end of October, 1956, Israel moved into the Egyptian Sinai. Two days later, France and Britain entered the conflict, which they had crafted. The airplane bombings of Port Said, Cairo and Alexandria began shortly thereafter. We were in a siege, our daily comings and goings curtailed.

“Papi, what are you putting on the windows?” my brother asked my father.

“I’m sticking up dark blue paper so that the planes will not see any lights. Then, they will not bomb our apartment building. Here, hold it up for me and I’ll fasten it.”

“Will it have to stay up forever?” my brother continued.

“No, this will all be over soon and everything will return to normal,” my father answered quietly.

When the siren sounded, alerting us of possible bombing, we would turn off all the lights and quickly make our way down to the basement of the building. All the families living in our building would join us, waiting for the all-clear signal. It was a new routine for us and, amidst crying babies and stressed adults, anxiety soon became the norm.

Schools closed and we were home all the time. My father’s car parts business and my grandfather’s appliance store would often be shut. We had little social life. Then, one evening, my parents decided to visit some cousins living nearby. They entered the building and spoke to the concierge, Mohammed, whom they had known for years.

“Mohammed, how are you? Is Madame Esther home? We would like to go up for a short while,” my mother greeted him.

“Yes, Madame, they are upstairs.”

The concierge let them in. They were there barely an hour when there was a knock at the door. Mohammed had called the police. My parents, though both born and raised in Egypt, had broken a curfew imposed on foreign nationals. The Egyptian citizenship they had possessed had been stripped by a new law. Many Jews were accused of being Zionists and traitors and were declared foreigners. The Nasser government had enacted other regulations, including abolishing civil liberties and allowing the state to arrest people without charges.

The next morning, as requested, my father reported to the police station and returned home dejected.

“I have an expulsion letter. We need to leave Egypt in eight days,” he told my mother. “We are allowed to leave with one suitcase each and with only a small amount of money.”

My mother was panicking at the thought. “What are we going to do? How can we sell the apartment and the business? What about all our things?”

“I have signed a form ‘donating’ the shop to the Egyptian government,” my father replied. “We no longer own the shop or the apartment. I will see if I can leave some money with Ibrahim and have him send it to us when we know where we are living.”

“But where will we go?” demanded my mother.

My mother was now stateless. Her family had been wanderers since the Spanish Inquisition, and the previous country they had been in, two generations ago, was Bulgaria. My father’s family had also wandered, but, by a quirk of fate they had once lived in Algeria. In 1870, the French government granted citizenship to all Algerian Jews. That citizenship became our passport out of Egypt.

The following days were a blur of activities for my parents. We stayed home from school, full of worry about what was going on and what would happen next. Our parents’ unusual behaviour left us afraid.

“I want to go to school and see my friends,” complained my eight year old brother, Charles.

My mother bought two new suitcases and purchased clothing for all of us. We would need coats, boots and warm clothing for the cold winter in Paris. Whatever we took with us had to fit into a few suitcases. My father bought plane tickets for the six of us. He sold off part of the stock in his store and gave the money, which we were prohibited to take with us, to Ibrahim. “I will send you the address where we will be. Please, Ibrahim, send us this money. It is very important because we have nothing else,” pleaded my father.

Ibrahim nodded. Did my father really believe the money would follow? The truth was that the money never appeared.

We visited family and friends, saying goodbye. My grandparents, my two aunts, my uncle and their families all would soon follow in our footsteps to Paris. More distant relatives were heading elsewhere — to Israel, Switzerland, Brazil, and Australia.

“When will I ever see them?” my mother sobbed.

“Au revoir, au revoir! Bonne chance!” our relatives cried to us. “We will meet another time.” The connections would never again be the same. After our six-month stay in Paris, my mother saw her parents only once before they died. She had visits with her sisters and brother a handful of times.

On our last day, we took a walk along La Corniche, the beautiful promenade and road hugging the Mediterranean Sea. We had spent so many lazy days on the beach, strolling along the walkway, eating ice cream and jumping into the turbulent Mediterranean. Now, we loitered, watching the sunset over the sea, the smell of the salt water seducing us, We stopped at cafés and pastry shops, to savour the sweets and the aroma just one last time. Our forced upheaval was a betrayal of a life we knew and which we had expected to endure. For the first time, I felt the sadness of loss.

And then … we were up in the air, flying away from Alexandria, away from Egypt, away from innocence and into the unknown. 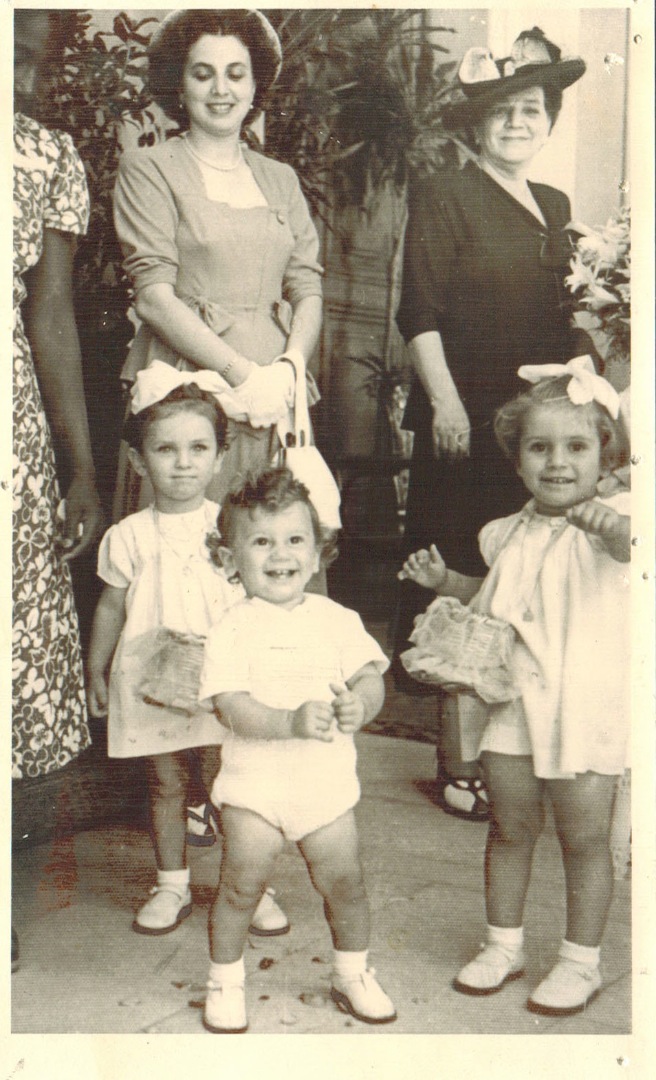