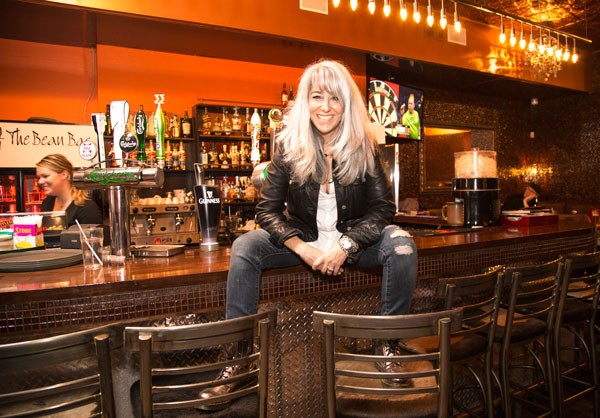 Twenty years ago, sisters Carolyn, Debbie and Andrea Molot decided to go into business together. They opened up a coffee bar in Westdale Village that, with its casual but elegant vibe, was an instant hit.  But their subsequent  takeover of the iconic Main Street West deli Switzer’s (which they renamed Sisters) proved to be too much of an energy drain for the three young mothers, and as Carolyn and Andrea moved on to other endeavours, Debbie would discover that her strong work ethic — and the benefit of a new business partner, would allow her to reach this milestone.

Can you describe what those early years were like?
We opened up The Bean Bar in four months in ’93 and then we took over the deli a couple of years later. It was brutal. One of us might open up The Bean Bar for the day and then have the night off but then would have to open up the deli at 6:30 in the morning.  We all had little kids ... We were nuts. We stumbled and fumbled. We had management and people experience, but certainly not restaurant experience.  The deli was not making money. Coffee prices had gone up and we hadn’t changed them. It was too much work for nothing and my sisters moved on.

How did things turn around?
I have an incredible support system in a man named Robert Wilton. Robert came in and we went from being a very popular poorly-run restaurant to being a money-making full lifestyle restaurant. He managed to tighten this ship so I could do what I did best and he could do what he did best. I’m the day girl. He’s the night guy. I’m the schmoozer. He’s back of the house.

What’s  your business philosophy?
As soon as you walk in that door I want you to  feel like there’s nothing we won’t do for you.  You are walking into my home.  But it is not just about me. We’ve had staff here for nine years. The kids that start here are either phenomenal or they will evolve and grow with us. They’re rewarded and made to feel like family.

It sounds like you really care about people.
It’s the only thing. I can only be here 20 years later because hopefully we as a team are doing a good job, but we listen, and grow and evolve — which is my number one word. It’s important to me that both my staff and our customers evolve. Everytime you come in here there should be something fresh and new.  I’m not going to take away your favourite grilled cheese. But I do want you to learn and grow and try new things.

What brings you the greatest satisfaction?
A customer talking with you, embracing what you do and loving being here. I met a woman today who told me she comes here every week to have our tuna sandwich. It’s a basic tuna sandwich, but the portioning is gorgeous.

Do you have any regrets?
There is not one thing I regret doing because it gets me to the next better step. I’m turning 50 and every year is better than the next.  I’ve learned to embrace everything  — even the bad decisions and financial problems.  Everything. It’s all in there with health and happiness. You can’t avoid it.

What makes The Bean Bar a Hamilton institution?
Three sisters. We grew up here. We all came back. Everyone of us. We believe in supporting Hamilton and we care.