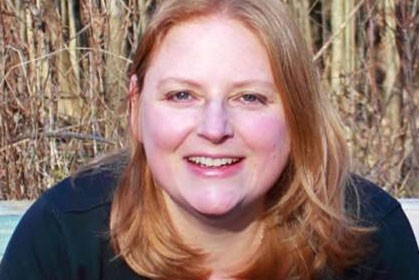 A love letter to her father. That’s how author Joanne Levy describes her latest book for young readers titled, Sorry For Your Loss.
Levy, who was born and raised in Hamilton, but now lives in Clinton, Ontario, is the daughter of the late Marcia Levy and Dan Levy, who presides over Hamilton’s United Hebrew Memorial Chapel.
Sorry For Your Loss tells the story of a teenager who lives next door to her family-owned Jewish funeral home (modeled after Hamilton’s Jewish funeral home) and thinks she knows everything about rituals around death and dying. But when her friend loses his parents in a tragic accident, she realizes that there is very little she understands about the grieving process.
In the book’s  foreword, Levy writes of several false starts when she initially sat down to write her story. Then she lost her mother. “And a weird and very unexpected thing happened. When we went to the funeral home to make all the arrangements, because of my father’s position, we had special, behind-the-scenes access. I realized I felt comforted by what I already knew,” she wrote.
Levy remembers realizing at that moment that many mourners do not have prior knowledge of Jewish burial rituals.
“We don’t talk much about ... the particulars about what happens to our loved ones’ bodies,” she went on to write. “Many of us—especially kids—really want to know, but we don’t have the access or a safe place to explore what happens when we die.”
Levy said she wrote Sorry for Your Loss, which she likes to describe as “if Judy Blume wrote Six Feet Under,” to pull back the curtain of Jewish burial rituals in a safe, informative and entertaining way that was accessible for kids (and maybe for grown-ups too).
Her father agrees.
“When I read the book, my first thought very clearly was that this was not just for teens and I thought how much adults and parents would learn from this book,” said Dan Levy, adding that a significant percentage of the people he encounters are not familiar with traditional Jewish burial procedures.
“But," he said, "you have to take into consideration ... that they’re not in the best of thinking. It’s a very difficult time for people, and many people forget what they really know."
Sorry For Your Loss has been receiving excellent reviews and can be ordered through A Different Drummer Books in Burlington.