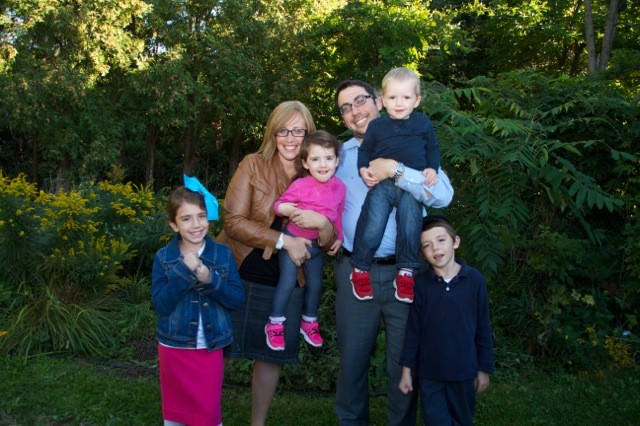 In Hamilton:
The Vaturis moved to Hamilton in Sept. 2012 from London, Ontario. Originally from Toronto, the Vaturis lived in London for three years while Avi was attending law school at Western University (he commuted to Toronto during his first year.)  Their plans to move back to Toronto changed as a result of the recruitment efforts of Rabbi Daniel Green.

Bubbi Bessie’s at Shalom Village   —  Baila: “It’s our place to go for lunch. Avi goes at least twice a week.”

Living in a small community —  Baila: “I love, love, love the small town mentality. In Toronto you’re put into a social setting where  it’s ‘this is where you belong and this is where you stay,’ and you really don’t look outside your box ... None of that exists here.“

Avi: “Because the Adas is the only orthodox shul in the city ... by default you’re surrounded by a bunch of diverse people that in Toronto you wouldn’t be exposed to.”

Shabbat at the Adas — Avi: “Our friends from London came here for one Shabbat and fell in love. It was  (a combination of) Yaakov Morel’s davening,  seeing how the community interacted on the street and how everyone in shul was so warm to each other.  It was something  they wanted to be a part of.”

The JCC and Camp Kadimah —  “We love the JCC events. My kids aren’t lacking because we’re not in Toronto.”

Better housing options — Avi: “Because the Westdale area is so coveted, we’re competing with landlords who rent out to students. I could be servicing a very large mortgage for the rent I’m paying right now.”

A kosher restaurant — Avi: “I think there is a nice amount of people who really would love one.”

Relocating the JCC and Federation offices —  Baila: In London, the JCC and the Federation offices were connected to the day school ... and the JCC was part of our daily lives. If Hamilton’s JCC was in a better location, all the kids  could come to the JCC for after-school programs. I also think that Federation would have a (more familiar) face.

Their perspective on how to grow the community:

Baila: “Hamilton is  like a hidden gem, and people don’t know how much of a vibrant community exists here. If we hadn’t been recruited, Hamilton wouldn’t even have been on our radar. We would have gone straight from London back to Toronto because in our minds that’s where we had to be.”