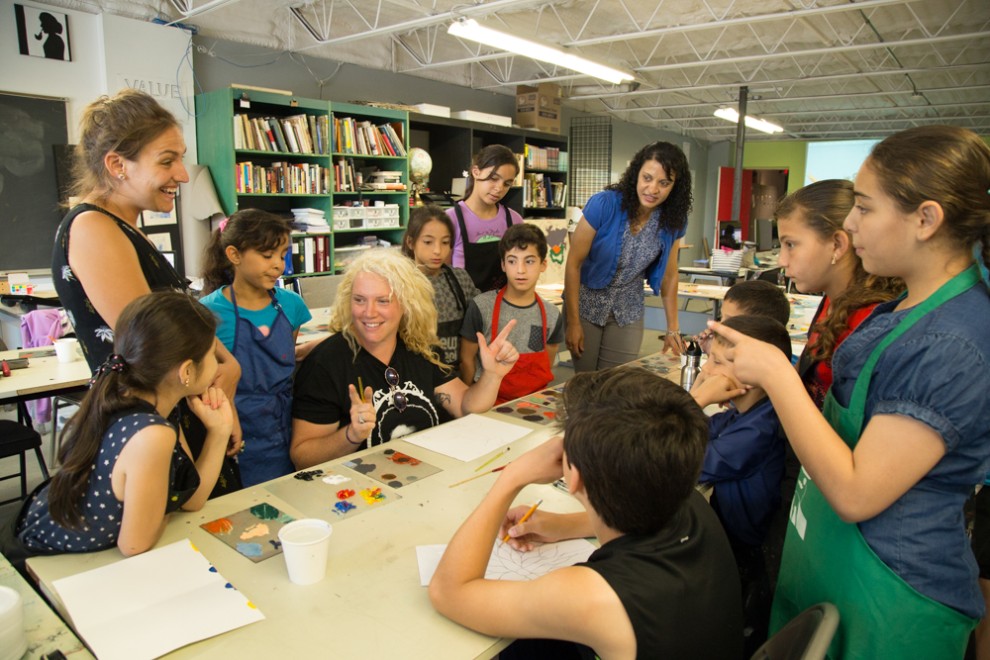 When local artist and art educator Becky Katz was asked to organize an art camp for Syrian refugee children this summer, she could think of no one better to run it than her cousin and frequent collaborator, Jackie Katz. The latter’s extensive experience teaching theatre to refugee children coupled with both young women’s natural inclination towards empthy and compassion made the collaboration particularly rewarding. Below, the two open up about what they learned from the experience.

Where did the idea for this camp come from and how was it funded?
BK: The summer camp was special because it was created specifically because of  a fundraising concert that took place on June 3 by this well-known band (American alternative rock band) The National. All the proceeds went towards art, recreation and music programming for newcomers. So because Centre 3, where I work, had an existing relationship with Wesley Urban Ministries working with government assisted refugees for the past two years, they selected us as their arts partner.

How did Jackie get involved?
JK: Becky was very aware about my interest in working with children, particularly refugee children. We’ve collaborated on all different kinds of projects and so everything about it made sense.

How were your roles defined?
BK: I coordinated the camp, but because I’m overseeing a lot of projects, I’m not able to commit time to all of them, but I do very much enjoy teaching and being on the front lines like the miniature paint lesson I taught today. Jackie is the main facilitator.

What role does your Palestinian interpreter play?
BK: Mayada interprets for Wesley on a regular basis. She was incredible and single-handedly made the camp better by recruiting more children because at the beginning of camp we were losing a lot of campers to an Arabic school that was happening at the same time.

What is your goal for these children?
JK: Every single day I check in with each individual kid and make sure that they are having their personal best time. And we do accomplish that, every single day, every single kid is in heaven, loving it, wanting to come back tomorrow.

What have your interactions been like with the parents?
BK: All of them are quite appreciative and gracious.One family I could tell had a lot of separation anxiety which kind of broke my heart because I just can’t imagine what they’ve gone through. One of their sons was left in Turkey so I think they have a hard time leaving each other. So the dad was calling my cell phone throughout the day and checking on his kids and he actually came and picked them up early.

JK: A lot of the families are living in the residence at Wesley so they don’t have their own home. So they have caseworkers figuring out housing. I had a dad walk up and down James Street for about an hour with five kids looking for the studio, but because he didn’t read or speak English he gave up and went back. So we ended up having to say just come to the camp, we’re going to meet you at Wesley.  Some of the  parents weren’t able to wrap their minds around  their kids getting free child care and art lessons. It feels unsafe and they don’t want to separate from their kids. We had parents yesterday not leave because they just couldn’t handle it. For the first time in my life I spoke to a woman in a full burka and it was really interesting. She had these bright blue eyes and she was so sweet, just a normal mom.

Do you have any sense of what these kids have gone through?
JK: I do not know the particulars of any traumas because I’m not their caseworker. I’m there to teach them art and give them a really good, free, fun time. What I do know is that they were all in camps in Turkey, Lebanon and Jordan for more than two years and have a fondness for Syria. The younger kids don’t remember Syria but those who are older remember everything and talk about how beautiful it is there.

What else have you observed?
JK: There’s a maturity in these kids that I’ve never experienced in any other group of young people that I’ve worked with and I believe it to be because of how fast they had to grow up. The older children are so close to their siblings. I’ve never seen anything like it. There’s a sense of having been through everything together and therefore they’re just so bonded.  It’s for that reason too, I think, that they all have an extreme fondness for their parents. I also found their modesty really interesting. The girls start wearing their hijab when they get their period. After that, they won’t dance or do things that draw attention to themselves, because of something so holy and beautiful. They believe that God is watching them and so they do everything with the utmost care.

How has working with this population affected you?
JK: Because I grew up with half a day of Hebrew I was really able to catch on to Arabic quickly. The intonations are very similar. The way that it’s written right to left. I worry about the prejudice these families are facing. We had a guy yell out of his car window “Arabs” two days ago. I also worry about the negative reactions to what I’m doing in my own community, because of the fear that’s instilled in them via the media. From so many people I hear, “did you hear about the Syrian asylum seeker who blew up this or blew up that?” The Islamophobia is horrendous. The prejudice of the world is against this group of people.

What was most surprising  thing you learned about the Syrian culture?
JK: Two of the children I work with are disabled. They’ve suffered brain damage, but they’re unbelievable kids. I expected because there’s so much stigma around mental health in western culture that there would be in this case as well.  But they are treated so beautifully and have been taken care of so well by their family. The love that I’ve seen in all of these families has been overwhelming to me.