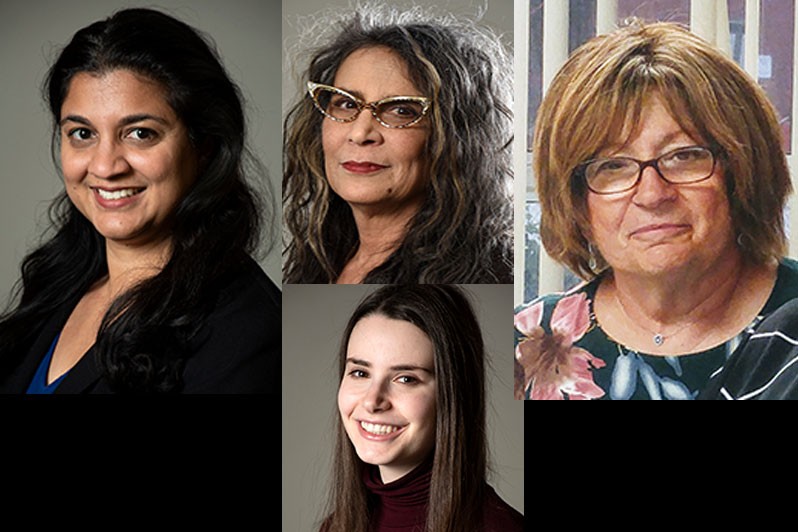 Among this year’s YWCA Women of Distintion Award nominees are four members of the Jewish community.

“We can’t think of a more deserving recipient for nomination,” said Jewish Family Services (JFS) executive director, Alexis Wenzowski, acknowledging Krames’ many achievements which include assisting in the resettlement of more than 200 Soviet Jewish families during the 1970s and 1980s, creating a seniors' day program, securing a grant to record Holocaust survivor stories and creating the Hamilton Kosher Food Bank.

JFS president Susan Roth says Krames is the most compassionate person she knows. “Carol built her life around helping others find their way, empowering them, nurturing them along the way.”

Judith Dworkin’s students and colleagues praise her as a conscientious community professional who encourages students to connect with learning and advocacy opportunities and empowers them to take on leadership roles.

In Dworkin’s nomination letter,  one student wrote that Dworkin leads “by supporting those around her to be the best they can be, resulting in a team that is not only collaborative but also high-achieving and dedicated.”

“Judith has been a significant role model since the day we started working together. She taught me how to lead kindly, advocate for justice and foster self-compassion. Student leadership at McMaster Hillel would not be what it is today without Judith’s warmth, commitment and positivity.”

Another student described Dworkin as “a powerful female role model who encourages young women to assert themselves in leadership roles ... including speaking opportunities and governance roles.”

Hillel Ontario’s chief education and campus officer, Rabbi Seth W. Goren, described Dworkin as a mentor to other Hillel staff and contributor on issues of diversity.  “Because of her,” he wrote, “Hillel Ontario is a more inclusive organization.”

Community activist and artist, Robin Zilberg, is best known in Hamilton circles for her one-woman show and book BorderLineMe, an account of her struggles with addiction and abuse as a child and adult survivor of human trafficking. In her unflinching willingness to share her painful history through one-woman performances, storytelling and inner-child workshops,  Zilberg has become a role model and a source of inspiration, wrote her friend, Lisa Millar, in Zilberg’s nomination letter.

“She inspires others because she opens herself up to what was, what is, what could be and the endless possibilities for healing and renewal for women with her work.”

Bereskin launched the organization in 2015, in response to a local high school student’s request that she transplant a similar program from Toronto on which Bereskin had worked.

“The manner in which Cassidy ...  developed the project, leading but also opening positions of leadership to others in organizing the event, is an excellent example of how Cassidy leads ... by developing skills and confidence in others,” wrote one of her professors who attended its first session.

For her work, Cassidy has been featured as a Global ChangeMaker by We Make Change and in TMX Group’s Canada’s Next 150 campaign.