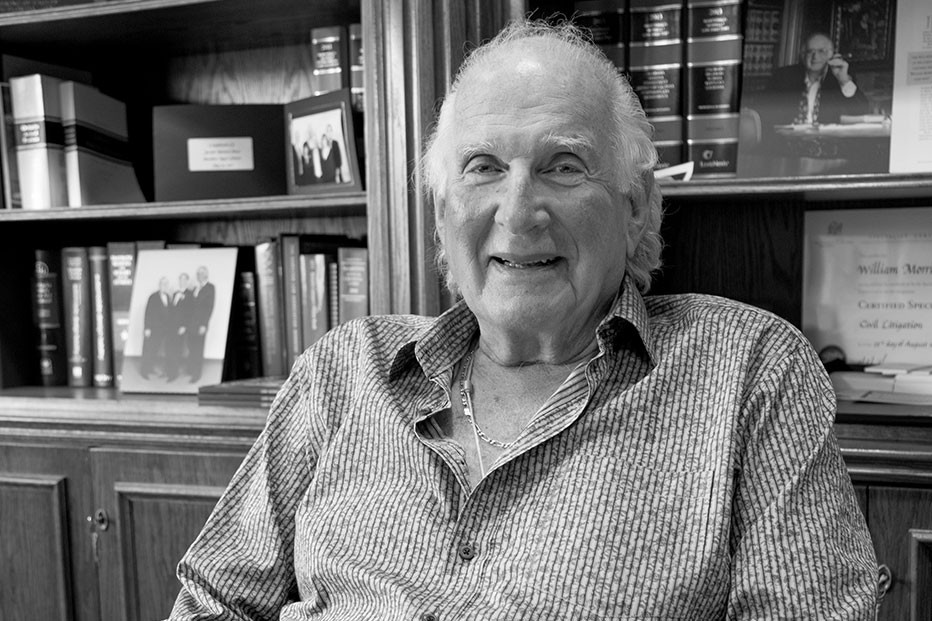 Giant. Towering. Larger than Life.
These are some of the words people find when they are trying to describe someone really extraordinary.
They are good words. Colourful. Extravagant. Evocative. They conjure up an ineluctable image. They are strong and powerful, but sometimes they can be over-the-top, or, as with all words at times of profound loss, simply inadequate.
But for our friend and colleague Bill Morris, they are supremely apt. In fact, Bill is the only man I have ever known to whom they can be applied unreservedly – literally and figuratively.
And still, they are inadequate.
Warm. Generous. Reliable.
Engaging – and engaged.
Outrageous – and outraged.
Courageous. Relentless. Righteous.
Funny. Original. Irrepressible.
Decent.
Those are some other words.
He was ours. And he loved being ours. Apart from his beloved family and Jewish community, he loved nothing more than the Hamilton bar – and he bestrode it like a colossus.
Law Association president. Medical Legal Society founding member and president. Legal Aid Committee founder and director. Ontario Trial Lawyers’ Association, founding member and director. Lawyers’ legacy for Children, founding supporter and major benefactor. People Against the Insurance Nightmare (P.A.I.N.), founding supporter and co-chair.
I will never forget Bill roaring into the Ontario Legislature to teach a legislative committee a lesson in justice on behalf of P.A.I.N. They called his three-person delegation “The Lion, the Witch and the Wardrobe.” There was never any doubt about who was the Lion.
He was fearless, outspoken, intimidating and passionate. He was never afraid to get his hands dirty – or his boots – deep in the trenches for the little guy. He ran a virtual plaintiff-litigator college out of his office and in the courtroom. Its graduates became some of Hamilton’s finest lawyers and paralegals.
He was a trailblazer, an innovator and a Champions’ League trial lawyer. If there is a heaven, after the big win that was his life, he is surely there making a vigorous argument for costs.
Hopefully, he will be able to start smoking again. There was a time when it seemed his ever-present cigar would never go out - always big and expensive and always a few spares in his pocket for special friends. It was a permanent appendage, abandoned only temporarily in the wall-mounted ashtrays beside the courtroom doors as he made his case inside – to be faithfully resurrected whenever there was a break in the proceedings.
But one of the most impressive things I ever saw him do was to quit cold-turkey when his doctors told him to. The vaporous love affair was over – stopped cold by the iron will of Big Bill.
He could be imperious and dismissive; impatient and over-bearing. But he was really a big teddy-bear—and an absolute marshmallow when it came to his children and grandchildren. He had a heart of gold —and was an easy mark for a worthy cause —especially if it involved children, young people, the marginalized — or Israel. His citizen involvement beyond the profession was prodigious, especially through B’nai Brith.
For those of us who loved him and labored in his shade, it feels as if a giant redwood has fallen in our forest, leaving a gaping hole in the canopy.
But, as Leonard Cohen taught us, “That’s how the light gets in.”
Never to be extinguished. Never to be duplicated.
Our Bill.