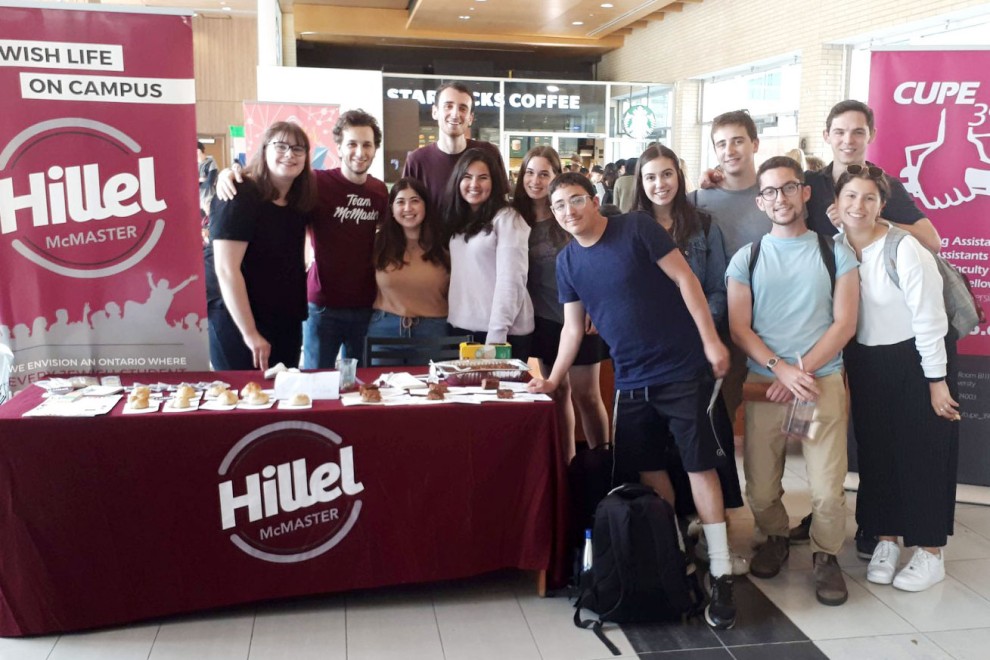 As first year Mac students moved into residence for a semester of hybrid online and in-person classes last September, the Jewish students among them received a rude awakening when they opened the  “welcome back” edition of the campus newspaper, The Silhouette.  Inside the issue was an article that effectively attacked McMaster Hillel for its connection to and support of Israel and calling for the club’s defunding.

Maya Mammon, a first-year student majoring in life sciences, was handed a copy of the newspaper during welcome week.
“While I wasn’t 100 per cent shocked by the article’s subject matter since I feel like going to Jewish school for so long, this is stuff they almost make us hyper-aware of, it still left a weird taste in my mouth” she said.
Mammon said that while she doesn’t think most students who voice negative opinions about Israel “have terrible intentions,” their words, nonetheless, “take a toll on Jewish students. It’s definitely been an adjustment.”
It’s become somewhat of a rite of passage for first-year Jewish students to discover that the Israel they’d come to associate with innovative inventions like the USB memory stick or the cherry tomato is not the same Israel that’s being portrayed on university campuses. That Israel, they almost immediately understand, has some pretty outspoken critics, and the disheartening feeling sinks in further when you realize that the peace dove you were raised to be doesn’t cut it anymore in academic discourse. Dove-like silence can’t protect you from your peers and their claims that what’s close to you is irredeemable.
Hayley Kupinsky, a health sciences student, said that McMaster Hillel has been “one of the few places on campus that feels familiar” in her transition to university.
“It was really hurtful to see someone writing that, essentially, Hillel shouldn’t be allowed on campus, when, in reality it is simply a safe space for Jewish students, and has never pushed a political agenda of any sort,” she said, a sentiment echoed by Hillel president Hannah Silverman, in a subsequent issue of The Silhouette.
Hillel is primarily a resource for Jewish students at university, not the staunchly right-wing anti-Palestinian organization that its detractors make it out to be. However, in an age of social media activism and oversimplification of geopolitical conflicts, Hillel has become a victim of cancel culture for apparent moral impropriety on foreign politics, despite not being a political organization at all.
It’s become a difficult line to navigate—wanting to hear perspectives about the Israeli/Palestinian conflict you were not taught in Jewish day school, while feeling the need to protect the organizations and resources that sustain you as a Jewish student from public scrutiny and supporting your Israeli family and friends. This line becomes more blurred as social media activism seeks to oversimplify and polarize a centuries-long geopolitical conflict that has two valid narratives as a black and white, good and bad, “us versus them” way of thinking. That mentality, while easily digestible and shareable, ignores the many nuances of a complicated history, which only furthers cycles of misinformation and alienation.
It also creates the same “us versus them” dynamic vis a vis Hillel and other campus groups and Jewish students with their peers.
Despite everything, I still have hope for a future of safety, freedom and peace for Israelis and Palestinians, which begins with connection and partnership in dialogue around the world. However, until that day arrives, we can’t solely rely on defensive support of Jewish organizations and students, but must be proactive in preparing students not to fight battles and lead their dove-like hopes to slaughter, but to start talking and learning. Perhaps a place to start is with Jewish organizations improving their Israel education to promote nuance and empathy with those whose stories we haven’t learned yet. This is the first part in connection and dialogue towards tangible coexistence, letting the birds of peace fly at last.
Dani Wohl is a second year student in McMaster’s Arts and Sciences program and a member of the McMaster Hillel executive. Watch Dani and Rabbi Ben Shefter discuss what it's like for Jewish college students on campus today at their upcoming JTalk on Feb. 17.