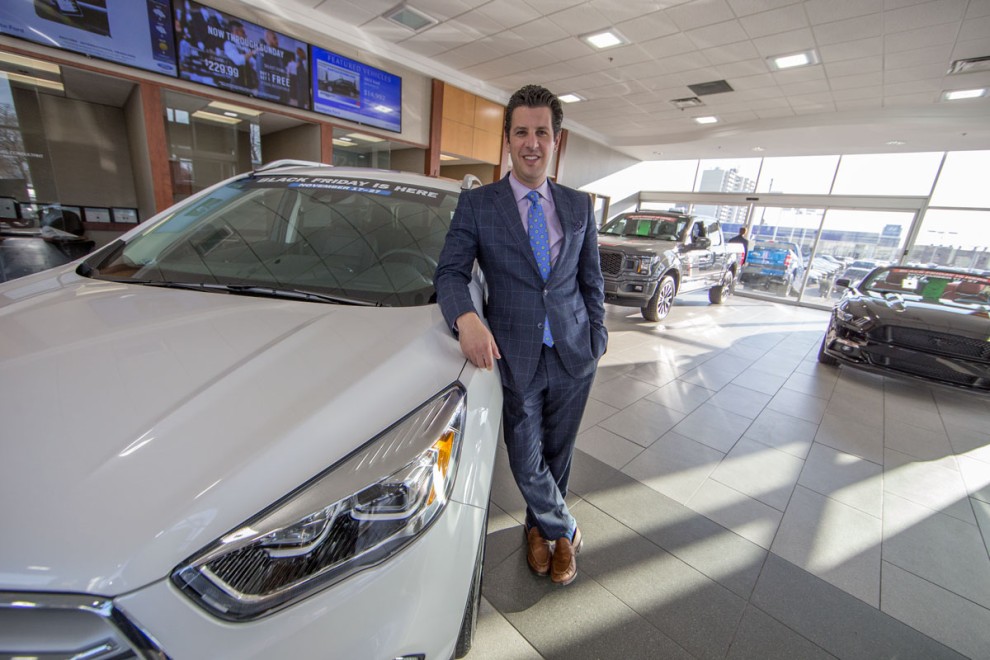 What was the best car you ever owned? You must remember it. Maybe it was the first one. Maybe your parents helped you buy it. Maybe you got it with your own coin. Maybe you drive it now. Maybe after years of buying used beaters, you’ve finally put down the money for a new one.

Did you put your kids into it? Did it take you across the country? Did you find a hidden spot that showed you the beauty of our almighty universe? Did it save your life?

The Richter Group has been selling these opportunities for more than 60 years. When I sat down with Lance Richter of Eastgate Ford, I asked him what his favourite sale was. He was quick to tell me: “The first one.” He swivels his chair to reach into a cabinet behind him and pulls out a photo album. For the first three years of his career, as the third generation of Richter automotive sales, he took a picture of every sale he made, including the first one. The customer was an older Italian gentleman named Ettore Zille. He bought a 1998 Ford Taurus SE for $20,000, plus tax, with a plastic bag full of cash.

Lance started working in the family business in 1998 after graduating from Western with a degree in economics. A vintage Eastgate Ford ad hangs in his office with three photos in it: one is of  his grandfather Frank Richter, who began the business, the second is of his father Lorne, who succeeded Frank as president, and the third? A toddler Lance astride a Ford tractor. The caption beneath his picture reads: Lance Richter: Future Ford Dealer.

It’s clear that the Richter Group is proud of being three generations deep into a business that is still succeeding despite the price of gas, numerous competitors, and other environmental and economic changes, both worldwide and here in Hamilton itself, that have made the automotive industry adjust rapidly to fluctuating changes. The LRT looms ahead, ready to be started. Nation-states are now making electric cars mandatory. Yet the Eastgate Ford dealership on Parkdale Avenue N. still hums with activity. People purchase both new and used cars, and bring their rides in for tune-ups and oil changes. On a previous trip to the tire centre, I spy a vintage Ford truck, my guess is from the 1930s, through the service bay window, getting its tires changed.

The Richters emigrated to Canada in the late 19th century. Originally a family of blacksmiths, horsepower was already deeply engrained in the family tradition when Frank opened the first of his used car lots on Barton St. in the 1940s. Lance shows me a blown-up photograph of one of the earliest lots, located at Main Street West and Hess. We look up the address on Google Maps to find that the mooring and wrought-iron fence still exists, even though the house behind the line-up of what look like Studebakers is now bigger and covered in yellow stucco. It’s a dentist’s office now.

After years of running used car lots, Frank became a Ford dealer, opening his first showroom in Stoney Creek in 1957 before moving it to its current location at Barton and Parkdale in 1964.Frank’s brother, Hy Richter, opened his own dealership – Bay/King Chrysler/Dodge/Jeep – in the 1960s. In another vintage ad that Lance shows me, it’s clear that although Eastgate’s showroom has expanded in the last six decades, much of the original 1950s design is still in there.

But it’s the cars that demand your attention. As I wait for Lance, my eye veers towards a brand new Ford Fusion with a mind-bending rotary dial gear shift that looks like it would be more comfortable setting the temperature on a convection oven instead of getting you from zero to 60 in 10 seconds. As we’re searching for the ads, I skirt past a Ford Lariat. To be honest, I thought they stopped making Lariats in the eighties. Lance quickly corrects me: they’ve been making these top-notch, all-the-bells-and-whistles trucks for decades with no end in sight.

Lance also informs me that Ford’s bringing the Bronco back in 2020. That’s a personal favourite of his. He’s got a red and white 1976 Ford Bronco parked in his garage. In between my questions, we spend time Googling cars. We both love them. I show him pictures of the one-of-a-kind aluminum Bugatti Atlantic I saw over the summer at the Canadian Warplane Museum. We laugh over Deadmou5’s silly custom Ferraris and Lamborghinis.

Cars aren’t just imprinted in the DNA of the Richter clan; they’re a serious passion.

Lance remembers his grandfather smoking cigars and playing cards with his friends. Not exactly a kid-friendly environment. When his father Lorne and his uncles Lowell and Ron came on board, they strived to create a more professional climate. Lance and his brother Jamie, who runs the Bay-King Chrysler/Dodge/Jeep dealership, continue that tradition.

I first met the Richter family as a young girl whose parents, Krystyna and Czeslaw, were the custodians of the Beth Jacob Synagogue. They were always welcoming individuals and clearly a big part of the community at Beth Jacob.

In the mid-2000s the synagogue purchased a vehicle for my father, a 1980-something hunter green Ford F-150 that, inexplicably, had pennies painted on the cab doors. I nicknamed it the Penny Truck, obviously, and drove it on occasion, when Dad let me, to my part-time job selling burgers out of the drive-thru window at the Dundurn McDonalds.

When it was time to get rid of the Penny Truck, my father was directed to Eastgate Ford, where he was introduced to Lance. Dad had exacting taste and Lance found a ruby red 2003 Dodge Dakota, with a full six-foot bed, that my father required, for the price he could afford.

Dad drove the Dakota until he passed away in 2013. As if knowing its master had gone, the Dakota began to fail shortly after and lasted about a year later under the hands of my brother-in-law.

I know how much that truck meant to my dad. He treated it like a third child. And I remember the rides I took in that Dakota. And I am forever grateful that the Richter Group gave my father, and countless other people, that same opportunity. That feeling of pride of owning something so big, so mechanical, so important to them. It didn’t just get them from place to place. It became a part of their family.

I bought my own car for the first time this year. She’s a magnetic blue 2011 Ford Focus SE. I named her Joni, after Joni Mitchell. Lance reassured me that 2011 was a good year for Focuses. Already in my short time with Joni I have seen just how much opportunity she has given me, simply by being my four wheels. That’s the kind of freedom Lance and his brother Jamie, together with everyone in the Richter family who has come before and will come after, provide Hamiltonians.