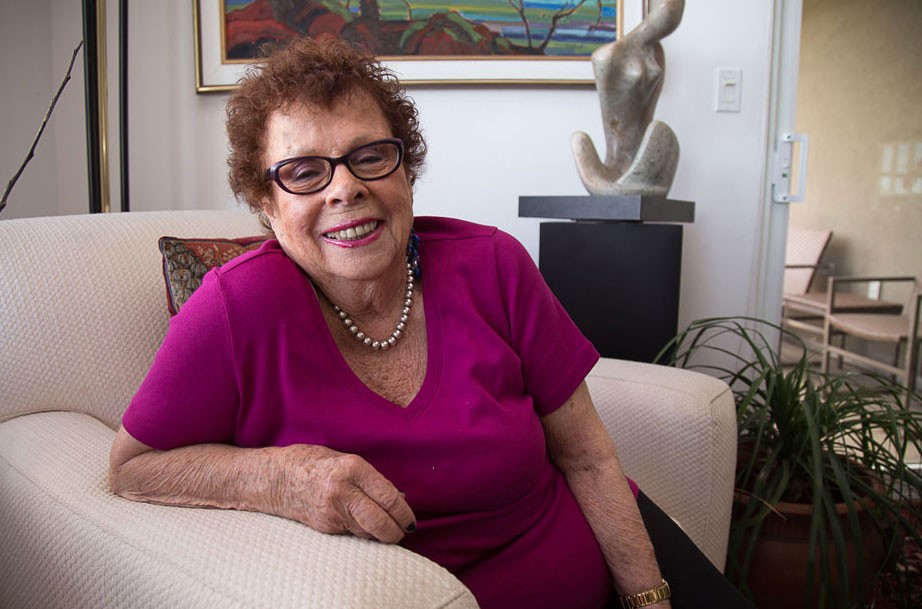 To say that Batia Phillips was “larger than life” seems like a cliché, but this saying holds especially true for my mother.

Batia was born on October 28, 1928, in Haifa in what was then the Palestinian British Mandate and what is today Israel. She described her life as a child in the streets of Haifa as carefree and happy. She was a latchkey kid, letting herself in and out of her home and fending for herself as her mother worked hard managing the labour movement cafeteria and her father worked in construction. Both of her parents had immigrated to British Mandate Palestine escaping pogroms and poverty in their native Ukraine.
At the age of 15, Batia left home to join a kibbutz. Several years later, she moved to Jerusalem to train as a nurse. During Israel’s War of Independence, Batia fought with the Palmach, an elite, highly trained combat unit. In one battle, Batia’s commander was critically wounded and she rushed to his side, taking her own shirt off to bandage his wounds. She picked up his rifle as he was incapacitated and continued shooting, eventually repulsing the attack. Shortly after, the Lebanese and Syrian newspapers ran a story of how the Jews were in such desperate straits that they had their women doing the fighting for them.
My father, Jacob, was also part of the Palmach, though in a different unit. A few years later they met and married. When the State of Israel came to existence, my father was sent as an attaché to the Israeli embassy to consult on mining technology in Kashmir and Burma. There are pictures of grand parties at the embassy with visiting dignitaries from that time.
At one point during those years, we lived on an ornate wooden houseboat on the headwaters of the river Ganges.
We returned to Israel briefly in 1963, but my father chafed under the socialist strictures of a developing new country and so we left, first to Switzerland, and then two years later to Hamilton. My mother did not want to leave Israel at all, but for the sake of supporting her husband, she went along.
Two years after arriving in Canada, my father died of stomach cancer. A lesser woman would have collapsed or at the very least returned home under the burden of being a young widow with three children in a foreign land. But that same fighting spirit that sustained her during the War of Independence came to her aid again during this period of adversity.
My father had left my mother five rundown apartments, which she fixed up using his life insurance money and sold, using the profits to buy an apartment building in Burlington. After a few short years, she owned and managed close to 200 apartments. My mother once told me after being in business for several years that if she had known the risks that she was taking, she might never have acted as she did. But thanks to her Israeli chutzpah, she did take the gamble and won.
Because my mother was working so hard to provide for her family, she needed help raising her young children. Eventually, she married a rather handsome and charming Hungarian Holocaust survivor named Egon, who was haunted by his painful memories. I am not sure those were happy years for my mother, though eventually they made their accommodations with each other. He died in 1985.
My sister Edith, a restless teenager like her mother at that age, returned to Israel at the age of 17. She soon married and gave birth to Sharona, Yardena and twins Shachar and Ayelet. When Edith got into a terrible car accident shortly after the twins were born, my mother flew to Israel and nursed her for several months. Assisting Edith and her family became the focus of my mother’s life. My sister died 17 years after that car accident, essentially succumbing to the injuries she sustained. Batia never forgave herself for Edith’s suffering, thinking that she was somehow to blame.
My mother’s generosity knew almost no bounds. God gave her abundance and she did not shy away from distributing it to others. Aside from helping support her family, Batia contributed generously to Jewish life in Hamilton. Her favourite charity was Na’amat, an organization that strives to enhance equality for women, fighting against domestic violence in Israel and in Canada.
Though Batia’s life was filled with adversity, she had the capacity to enjoy and appreciate much of what this world had to offer. After Egon’s death, she met a wonderful man named David and they became inseparable for many years, entertaining almost constantly at their Lake Huron cottage or their Florida home.
When my mother entered a room, her personality would fill it. She was charming, charismatic and mercurial. Her anger could burn hot, but she was surrounded by people who loved her deeply because they saw past her prickly outbursts to the warm heart and soul that filled her failing body to the very end. I think it is safe to say that there was no person who was part of Batia’s life who was not influenced or changed by her.
God gave Batia the opportunity to experience this life and she lived it with courage, adventure, love, and joy. Throughout everything, she filled the world with her laughter, which sounded like bells chiming.
Michael Gutman is Batia Phillips’s son. He lives in Israel.