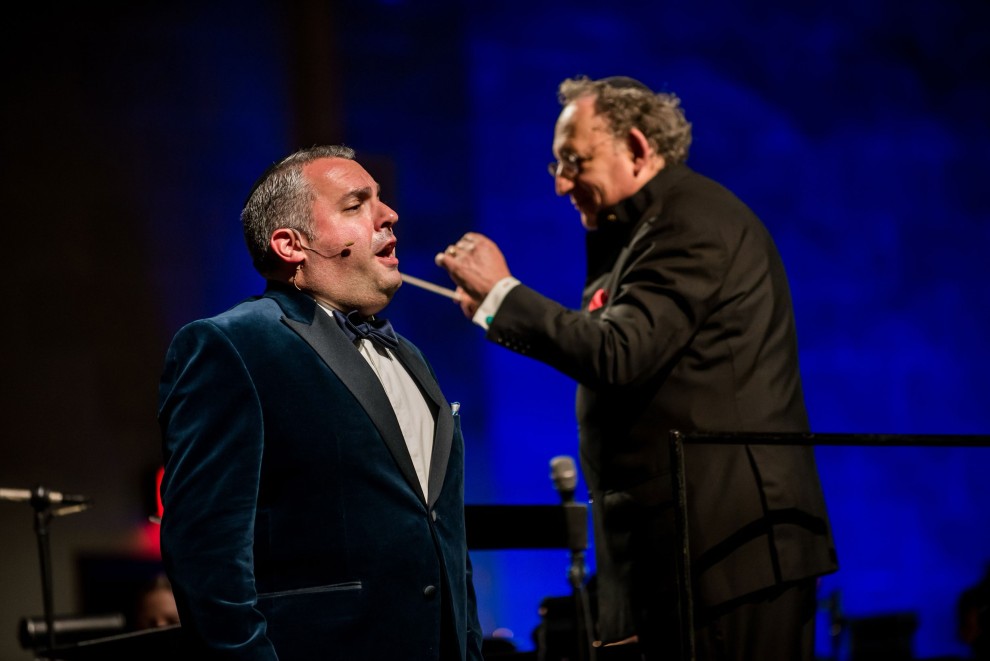 Boris Brott was not an observant Jew, but, according to his good friend, Cantor Gideon Zelermyer,  the late maestro always wore his Jewishness with pride. Brott and Zelermyer were frequent collaborators at the cantor’s Montreal synagogue, Congregation Shaar HaShomayim, but the two also shared the stage at a memorable concert at the Adas Israel in 2009. In the following interview, Cantor Zelermyer reflects on Brott’s spirituality and deep attachment to the city of his birth.

Q: When did you first meet Boris Brott and what was the nature of your relationship?
A: The first time I ever saw Boris conduct was at a concert that was put on by a colleague of mine in Toronto, Eric Moses at Beth Shalom Synagogue in Toronto. There was Boris, this big name in Canadian classical music, turning around as part of the encore, and singing a verse of To Life, L’Chaim from Fiddler on the Roof. He wore his Judaism so proudly and so easily. Boris conducted concerts in synagogues all the time. He loved collaborating with cantors. He loved sprinkling his speech with Yiddish.

Q: What do you remember about the concert Boris performed at the Adas Israel back in 2009?
A: As I understand, the Green rabbinic dynasty is a major force in the Hamilton Jewish scene and this was a proverbial passing of the baton from father to son. To walk around Hamilton with Boris was a really unique experience. I mean, he could barely make it down any street corner without three people coming to him and embracing him and saying hello. He was a major celebrity in Hamilton and I know what it feels like to have a major cultural celebrity like that come to your synagogue. It just makes you puff out your chest a little broader and you feel a special sense of pride that it’s important to him to come to the Jewish community to do something like this, and he was so proud of it.

Q: Do you have a favourite moment you shared with Boris?
A: Yes. It was a Leonard Bernstein centennial year concert that turned out to be my last collaboration with Boris. We brought in Jamie Bernstein, Leonard’s daughter, to emcee. To see Boris and Jamie, who knew each other when they were relative kids, sharing their memories of being together in New York, and hear Boris speak so lovingly about the way that Leonard Bernstein mentored him ... It was a labour of love for everybody involved. As part of that concert, we performed a piece that Bernstein wrote in 1986 for the reopening of the newly renovated Carnegie Hall. It’s a piece that is very mystical—the way I hear it is almost beams of light emerging through the fog, and at the end of the piece, a solo voice sings the priestly benediction.

That night, I sort of crept up out of nowhere at the back corner of the stage and Boris’s and my eyes were locked on each other while I was singing this blessing that we offer as parents to our children every Friday night. It’s one of the most remarkable 15-word formulas of any liturgical text anywhere: “May God bless you and keep you; May God’s countenance shine upon you and be gracious unto you; and may God grant you peace.”  This was a moment that Boris and I shared of intense spiritual connection and to do it in our magnificent sanctuary, as part of an evening and tribute to his mentor—Boris was aglow that night. It just meant so much to him and it meant so much to me, not only to have him participate in it, but to be able in a small way to enable him to have that glow, to be back with Leonard’s daughter, and to perform this repertoire that meant so much to him. You know Boris was not an observant Jew, but he was a proud spiritual Jew and we shared many moments... not just concert moments.

Q: Can you speak about the importance of Montreal to both Boris and Leonard Cohen?
A: I’ve been in Montreal for 21 years now. Most of my colleagues who are cantors in New York are off for Passover because the city becomes a Jewish ghost town during Passover. People go to destinations or they go home, and Montreal is one of the places that people come home to. If you have that filtered by which to view Montreal, then it makes it much easier to understand why it was so important to Leonard Cohen to know that he would rest eternally next to the three generations of his family that preceded him. And in Boris’s case, and again, it’s a very different thing to contemplate your resting place when you’re 82 as Leonard was and facing all sorts of different ailments. It’s another thing to be taken so violently, tragically and suddenly like Boris was. But I was honoured to preside over his burial in Montreal next to his parents. And that wasn’t a surprise to me. Yes, he spent the lion’s share of his life based in Hamilton. But Montreal was home. Montreal was roots. Montreal was family. And so, I perfectly understood that choice in a way that I probably couldn’t have when I first moved here. But having had the experience of being here as long as I have been, it made perfect sense.

LISTEN
The Shpiel on Hamilton's interview with Cantor Gideon Zelermyer