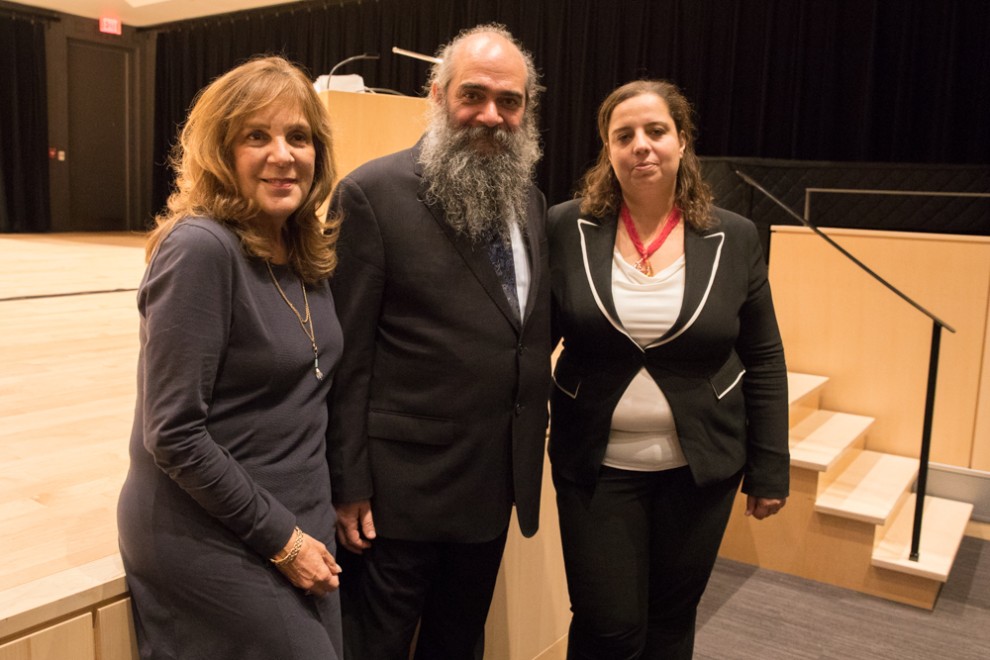 Humour and pathos were coupled together in this year’s Lillian and Marvin Goldblatt Lecture in Jewish Studies.  The lecture/concert, Singing and Laughing Against Fascism: Lost and Found Soviet Yiddish Songs of World War ll, presented in October by McMaster University’s Department of Religious Studies and The Socrates Project, exemplified how Soviet Jews used satirical music to sing in the face of the atrocities of war.

The lecture/concert has been has been described in the media as “haunting” and “remarkable.”

The basis of the presentation was the discovery in the 1990s of previously unknown Yiddish songs that were hidden in the basement of the National Library of Ukraine. The songs, collected by ethnomusicologist Moisei Beregovsky and other academics of the Kiev Cabinet for Jewish Culture, had been confiscated and concealed by the Soviet authorities in 1949.

The hand-written Yiddish documents dating from 1941 to 1947 contained thousands of songs written by Jews in Ukraine during World War ll. Written by Jewish refugees, soldiers in the Red Army and Holocaust survivors, the lyrics ridiculed Hitler and fascism.

University of Toronto Professor Anna Shternshis unearthed the documents at the Ukrainian library in the early 2000s.  Her work led to this project and eventual world-wide presentations.

At the local presentation, Professor Shternshis spoke on the history of the songs and their interpretation while Psoy Korolenko of Moscow and New York brought the music to life on the piano and with his vibrant singing voice.

Grammy-nominated singer Psoy Korolenko is a Slavist with a Ph.D. in Russian literature. He composed many of the tunes for the Yiddish lyrics. English translations were displayed on a jumbotron screen.

The presentation gave voices to Soviet Jews who were oppressed under German occupation. They would not be silenced by Hitler or Stalin and were able to find humour in tragedy as they sought courage to go on with their lives.

Audience members described the songs as poignant and heart-wrenching, especially those written by children during the Holocaust.

One audience member who prefers to remain anonymous, said: “I can’t even begin to describe how moved and mesmerized I was by Professor Shternshis’ historical commentary and Psoy Korolenko’s outstanding compositions based on the horrifying Yiddish lyrics of people suffering in the Holocaust. This collaboration brought to life the voices of the only eye-witness testimonies of Holocaust victims from shtetls in Ukraine, a chapter of history I knew very little about. The Yiddish lyrics, especially by the Ukrainian women and children, were painfully sad, but also surprisingly celebratory and funny. As a second-generation Holocaust survivor, I didn’t feel comfortable laughing at the humorous lines in the songs, but I understood the victims’ hatred and desire to ridicule Hitler and the need for humour to help keep their spirits up.”

Alan Livingston, a member of the Hamilton-based klezmer band, Touch of Klez, said: “The performance of Psoy Korolenko was really phenomenal. His stirring voice and piano accompaniment brought the feelings in the songs and poetry to life. He is like an actor that becomes the character that he is portraying.

“The songs and words were stunning, touching, and brought us moods that before this we could only have imagined had existed.

“The historical and documentary research done by Ann Shternshis was thorough and her words rekindled the emotions of the era. Much or all of what she discovered was compiled by Moisei Beregovsky. It is astounding that these documents from the Holocaust were preserved.

“On a personal note, as a member of Touch of Klez, many tunes in our repertoire are from Moisei Beregovsky collections, tunes that he found and preserved in the 20s, 30s and 40s in Eastern Europe. He was stopped and arrested during Stalin’s post-World War ll anti-Semitic crackdown. Without Beregovsky, much of klezmer would have been lost.”

The Yiddish songs have been compiled as the Grammy-nominated album Yiddish Glory: The Lost Songs of World War ll.