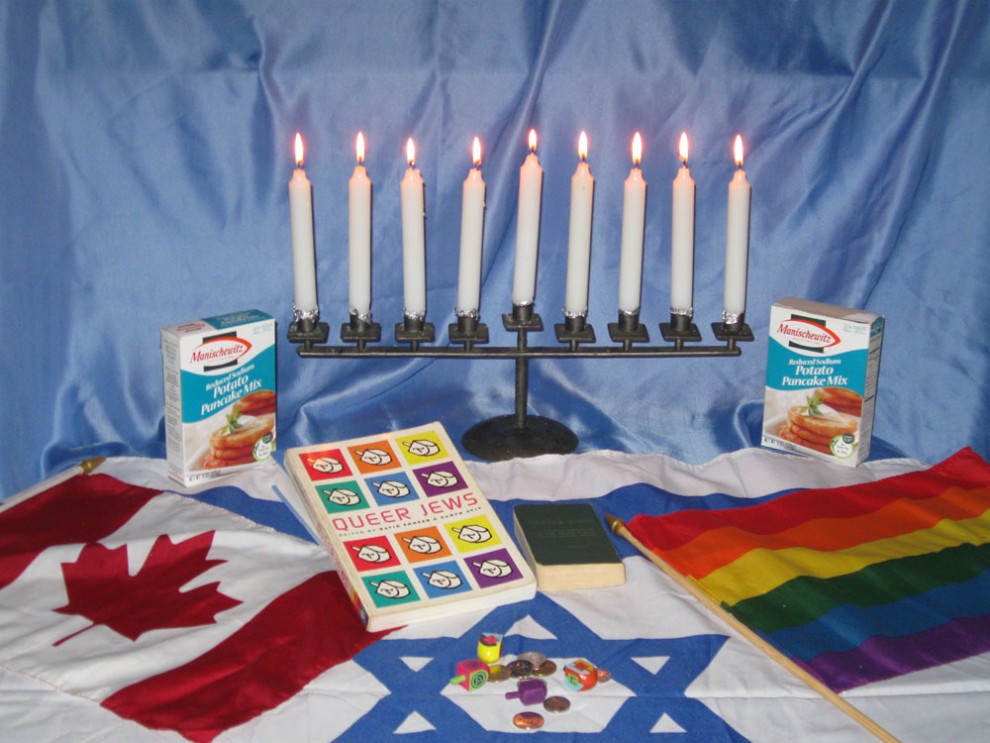 by Joanne Cohen, aka Solly the Butcher’s Daughter​

Once upon a time, at the Hamilton Hebrew Academy, we learned that Chanukah was a miracle that should be celebrated largely and publicly whenever possible.  When we were kids, I remember the electric menorah with the orange lights in the steamy window of Hamilton Kosher, just next to the old rotisserie for the barbeque chicken.  Both were proud symbols of our Jewish identity in Hamilton, and both, to my mind, were miraculous.  Especially the chicken.  Amid stories, songs, homemade latkes and dreidel games, we learned to be all of who we are.

By Chanukah 2001, I was active at Beth Tzedec, regularly published in pro-Israel advocacy in the left and alternative and LGBT press, speaking on U of T campus radio as “Jewish Contributing Editor” to “The Radical Reverend Show” hosted by Rev. Cheri DiNovo, networking with the Association for Canadian Jewish Studies, appointed to the Canadian Jewish Congress as Canada’s first openly gay representative, and had begun to form our unbeatable Coalition of Canadian Liberal Rabbis for Same-Sex Marriage with the assistance of Rabbi Irwin Zeplowitz of Temple Anshe Sholom, and his rabbinic colleagues across Canada.  We won at the BC and Ontario Courts of Appeal, Supreme Court, and Parliament of Canada, and yes, it all started in Hamilton.

Around that time, I had already founded the Jewish Gay and Lesbian Fund at the Jewish Foundation of Toronto, because Toronto’s former LGBT Jewish group, Keshet Shalom, folded just after 9/11, and we needed a base and community for those like us in Toronto, particularly to advocate for our needs.  This later morphed into Kulanu, the Jewish LGBT group based out of Hillel and the Wolfond Centre for Jewish Campus Life at the University of Toronto, with UJA and donor support.  Kulanu continues to mount events and to advocate for Israel at Toronto Pride.  At Chanukah 2001, I was writing a chapter in the academic anthology Queer Jews, looking at this same menorah in the window of my Toronto apartment, and thinking about all the Chanukahs I had celebrated with my family.  I had found the menorah in the late '90s on sale for $5 at a garage sale in midtown Toronto, and felt obliged to redeem it.

By June 2002, I was commissioned to organize the Canadian launch of the ground-breaking film documentary of LGBT Orthodox Jews, “Trembling Before G-d”, which was later screened at the Adas Israel Synagogue.  We had filmmaker and activist and rabbinic and multifaith panels at cinemas, special screenings, a gala at a downtown pub, a kosher Shabbat dinner, and then I launched the first-ever Jewish LGBT Pride Float in Toronto, to wild acclaim, with a million spectators blowing us kisses and shouting “Shalom!” We had about 20 kids dancing on top of a double-decker bus to Israeli disco in matching t-shirts and hats, promoting the film, with rainbow and Israeli flags, blowing kisses and flashing peace signs, looking like the kids from Camp Kadimah.  We broke box office records for “Trembling Before G-d”, which became an important starting point for discussions in many families and communities across North America, including those here in Hamilton.

I should say that my inspiration came partly from another great Hamilton Jew, Michael Bornstein, who marched proudly down Yonge Street with a giant Israeli flag in the early 90s with Keshet Shalom.  Toronto Pride was smaller then, with no barricades, and I rushed through the crowd to kiss Michael and tell him how proud we were of him.  It was such a huge flag, with gold braid, we wondered whether he had swiped it from the Grand Order of Israel!  We later learned from our friends at Pride Toronto that when InterPride saw video footage of our Jewish LGBT float in Toronto Pride 2002, they voted for ISRAEL as the site of World Pride 2006!  My post- 9/11 love letter to Israel actually made it around the world, and inspired many others.  The very first same-sex marriage registered in Israel was Canadian!  Love is a many splendoured thing, when it’s international, Jewish, Zionist, and LGBT positive!

Our Pride float was symbolic of Jewish diversity, pride and inclusion, even under fire, and so is my menorah.  In Nov. 2002, I was organizing a book launch and Chanukah party for Queer Jews in Toronto at Buddies in Bad Times Theatre, with dreidels sponsored by Israel’s Judaica, kosher catering with old-style latkes, sweet potato pancakes and sufganiot, cabaret singer and composer Harry Lewis on the piano with traditional Chanukah songs and his hilarious original tune, “Ch-Ch-Chanukah”, and readings by myself and my late academic colleague Oscar Wolfman.  The place was packed, as the snow fell.  My dear family was there, and we were photographed in NOW Magazine singing the blessings and “Maoz Tzur”, lighting the Chanukah lights on this same menorah.  We got great press, sold lots of books, raised awareness, supported Israel, and had a great time.

By Chanukah 2004, we had won at the Supreme Court, thanks to my father’s support, and that of my family, our great lawyer Prof. Ed Morgan of CJC and U of T, and our Liberal rabbis.  At Chanukah 2008, during a blizzard, I performed at a holiday food bank benefit for People with HIV/AIDS at Statler’s Lounge on Church Street, with friends from PROUD FM-108, singing and playing Chanukah songs on guitar, including a re-write of Adam Sandler’s “Chanukah Song”, a Nina Simone-inflected “Sevivon Sov Sov Sov”, and a Texas swing version of “Dreidel Dreidel” by Mark Rubin and his Ridgetop Syncopators,  featured on Channel 8 News in Austin, Texas. Complete with yodeling, which is apparently part of the Chanukah tradition in Texas.  They cheered, gave me encores and everybody sang along! Even in Hebrew!  I said I learned it at the HHA, and so could they, and so they did!  That’s MY Menorah!  Chag Sameach!

Joanne Cohen is a writer and consultant in communications, legal and financial administration, social media, marketing and political advocacy who has been featured as keynote lecturer to Jewish and LGBT audiences at U of T, McGill, and McMaster University, and has presented frequently in live media, professional, communal, synagogue and academic settings.  She is now working on a political memoir invited by an academic publisher and very happy to be living in Hamilton again.