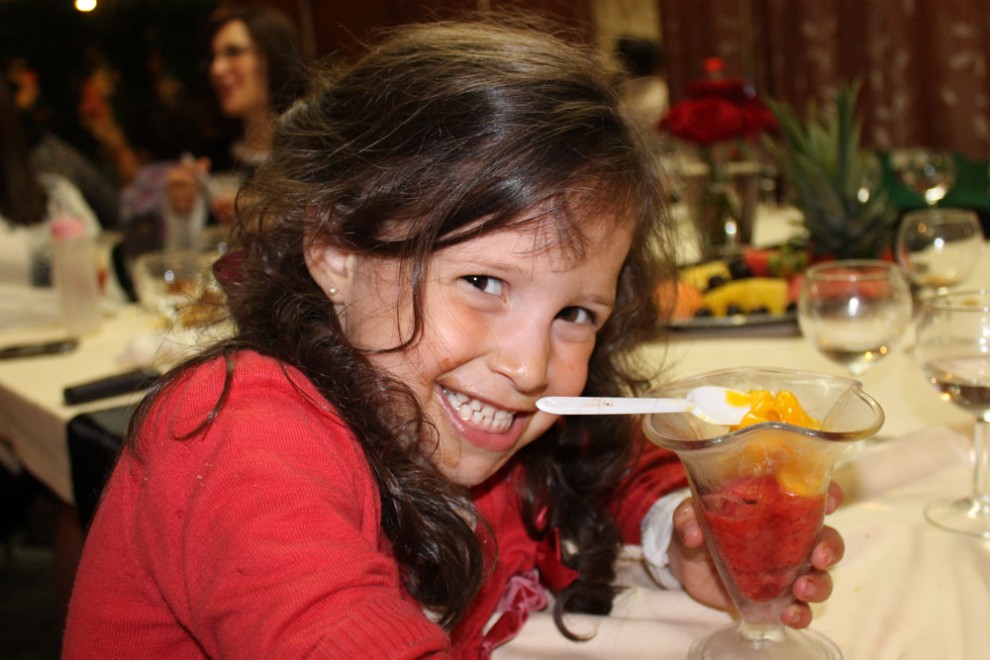 Moussia Zaltzman loved jumping and dancing. She welcomed anyone she’d meet with her bright, enormous smile, bringing joy to the halls, classrooms and playground at her school, Hamilton Hebrew Academy.

But this is the fourth school year where Moussia’s smile and laughter are missing from the place she loved.

On Sunday, June 14, 2015, Moussia, a good swimmer, was playing with friends under the watchful eye of many adults when she was pulled unresponsive from her backyard pool in St. Catharines. After 13 days at McMaster Children’s Hospital, Moussia died. She was six years old.

But now, an enduring reminder of Moussia’s presence is part of her school. On Sept. 27, Moussia’s Playground officially opened–a bright, colourful place with plenty of room to slide and climb and run.

“Moussia has her rightful place back at HHA,” says her mom, Perla Zaltzman. “Her presence was missing terribly. She was present in the hearts and minds of many and there is a small photo of her in her grade’s classroom, but there was no physical presence. New families might come and not know her. This is a physical presence with her picture and her name. It feels right. It assures me she will not be forgotten.

“We received so much support from the school community. We had a lot of support when it happened. And three years later, they are there to protect her memory and give her honour. It means a lot to us.”

A few weeks after Moussia died, Perla’s friend, Tiki Levgoren, asked her if she had any ideas for a way to memorialize Moussia. She suggested redoing the playground at HHA.

“It needed to be redone anyway, due to new requirements from the Ministry of Education,” said Zaltzman. “I really clicked with the idea. Moussia loved the playground. She loved the school. It would benefit her friends and all the children.”

A volunteer committee, including Maggie Norris, Elissa Press, Zohar Levy, Rebecca Shapiro and Rita Kopyto came together for planning and fundraising, with the ongoing support of Rabbi Daniel Green. They submitted the project to be considered for funding from the Ward 1 participatory budget. It was approved and the project received funds from the city. The rest of the cost is being covered through fundraising.

“Part of the challenge for a community that loses someone they love is to figure out how best to deal with that loss and preserve that person’s memory,” said Press. “Perla gave the community a gift not only by creating a wonderful new playground, but also by giving the community a meaningful way to remember Moussia, a child who was full of fun and energy. A playground for Moussia’s legacy makes sense and feels right, given that so much of Moussia’s life was spent at the HHA with her friends playing.”

Playground features were chosen based on survey responses from students and incorporate some of Moussia’s favourite things, including bright, rainbow-like colours and the hearts she loved to draw. The Moussia’s Playground sign is reminiscent of street signs in Paris, where Perla grew up. Moussia had travelled there a few times and loved the city.

“Moussia was full of life. She loved people. She connected with everyone, adults and children. She would talk to adults as if she were an adult,” said Zaltzman. “She could also occasionally be grumpy and clingy. I want to remember all of it. I don’t want to miss an idealized image. I miss my daughter as a whole. Every second of her.”

When Moussia died, Zaltzman and her husband, Rabbi Zalman Zaltzman, were expecting their daughter, Hannah, now 2. They also had a son, Avush 1 – both born on Moussia’s birthday, the fourth of Adar. Her other siblings are Mendel, 13, Daniel,11 and Pessia, 6.

“Now, all of my kids, including Moussia, are at the school. Not the way I want her to be. The playground is a pale substitute for her laughter and life and love and plain physical existence,” said Zaltzman, adding that Moussia’s siblings said they feel much better with the playground at the school.

“The older kids remember her there and felt her absence in a lonely way. Now they have her, in the best option B possible, a happy, beautiful and colourful way,” she said.

“During an assembly at school, one of Moussia’s friends, Aimee Levy, who is in Grade 4 now, said she had been sad since Moussia died. She missed her best friend and was afraid everyone would forget her. When she heard about the playground, she felt reassured that Moussia will not be forgotten. It helps kids get a handle on their own fears and feel together in their shared memories of Moussia. It also tells the children their value is huge, no matter what.”

NEED TO KNOW
The previous playground at Hamilton Hebrew Academy was built in memory of Lowell Hundert. Lowell and his twin brother Joey were born in December 1980 to Miriam and Steven. Lowell weighed only 1.5 pounds. He had seven surgeries in his short life and died at six months old. The twins’ older brother Josh was attending HHA when they were born. Miriam thought a new school playground would be a special way to honour Lowell and she raised funds from private donors to build one. The opening of Moussia’s Playground included a rededication to Lowell Hundert and his memorial plaque remains at the playground.