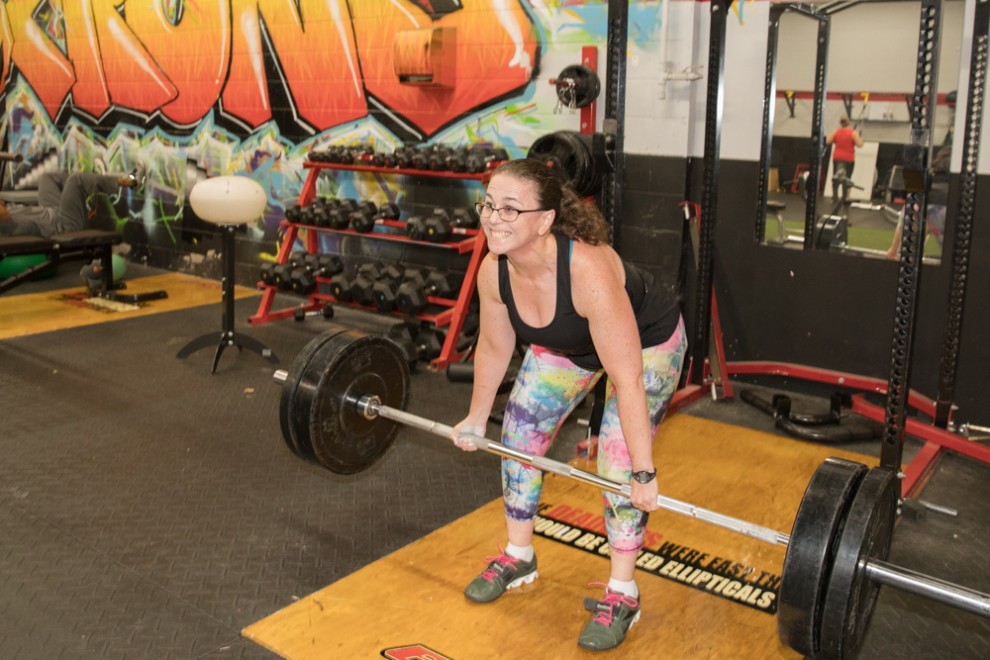 Brenda Burjaw’s strength is obvious from the first handshake.

It’s a firm, confident grip that says whatever the hurdle, this is a woman who doesn’t back down from a challenge. Whether it’s cobbling together financing for a multi-million dollar real estate deal, or hoisting more than her body weight off the floor in one quick, clean movement, anything can be overcome with the right combination of focus and discipline.

Burjaw’s ability to harness the power of focus and discipline was highlighted recently when she placed in the top three performers at the Canadian Federation of Powerlifting’s women’s open competition. Beyond a shiny trophy, however, that ability is also paying dividends as she faces the challenges of life.

That competition was one way station of a journey toward better health that started seven years ago.

“I watched my father deal with some critical conditions and now my husband is dealing with fibromyalgia,” she said, a chronic condition that has destroyed his physical strength. “I faced that and realized since we have a young kid we needed one parent who was strong and healthy.”

Those factors led Burjaw to a health and fitness boot camp with a group of girlfriends. As the other women dropped out one-by-one, Burjaw tried training for a triathalon, before deciding “I’m not made for running and I don’t like it.” Then, with the help of personal trainer Jim Lam she discovered weight training.

“It might seem a little strange for a mid-40s mom who’s a banker by day to be doing powerlifting, but it works for me,” she said. “I have that typical Jewish woman’s thigh syndrome and I’m a little bottom heavy so this is something I can do.

“I wanted to do something kind of different,” she added. “I’m not a follow-the-stream sort of fish, and I’m not a cardio person either.”

In her recent competition, Burjaw managed to hoist 255 lbs of weight from the floor to her waist before putting it down. It was one of nine increasingly heavy lifts she performed that day, failing only when the weight was increased to 265 lbs. The effort was good enough to place her third overall in her age and weight class.

Yes, she admits, it hurts to lift that kind of weight, but there’s a huge psychic payoff in accomplishing a goal she has been training toward for a year. In addition to her time at a Burlington gym, Burjaw has turned the family’s garage into a gym. She trains at least three times a week.

“Testing my physical limits that way is a huge thing for me,” she said. “Every time I lift like that I remind myself that I’m alive. The adrenalin rush you get from this is beyond any drug you could take.

“I needed to find an activity that exhausted me when I’m stressed out. You go and lift heavy, heavy weight and throw it down on the ground. There’s something cathartic about that,” she added. “That fact, that it’s so basic, it’s the basic human exertion of doing. It gives you that immediate feeling of accomplishment.”

“Really, this is a lot healthier than Prozac and less time consuming than going to a therapist,” she added.

The endurance she gains from powerlifting, she added, spills into the rest of her life. Her family are fourth-generation members of Beth Jacob and Burjaw will be the congregation's treasurer after the next annual meeting. By day she is director of commercial services for Meridian Credit Union.

Beyond helping with her own life, Burjaw said, she dearly hopes the lessons will be an example to her 11-year-old daughter Rebekah of the benefits of focus and discipline.

“I grew up in an environment of fad dieting where how you looked and how you presented yourself was fundamental about who you were as a person,” she said. “I earnestly don’t want Rebekah growing up with those kinds of image issues.

”I want to role model someone who is not fad dieting … and I want her to learn lessons about discipline. I want her to be an active kid who is happy about being strong and not worrying about what size she is wearing and if she is going to look like the girls in the magazines. I want her to be able to see that strong is the new beautiful.”

The lessons are starting to take root – Rebekah has already dropped dance lessons to study tae kwon do. Jim Lam, who has been teaching  Burjaw in the sport at Burlington’s Elite Performance Centre, praises his student as someone who “puts her whole self” into achieving her goals.

“The main thing I could say about Brenda is that she put her whole self into it. In the beginning I saw she had a real focus, more so than anyone I’ve ever known,” he said. “She wanted to get herself healthy so she set goals for herself and achieved them.”

“It was just amazing to watch how much she has grown into that area of strength training,” he added. “Now she has a taste of it and is training for the next one.”

While women in the powerlifting field are still rare, Lam says it’s a field of exercise they could benefit from.

“Women, as young girls, aren’t really introduced to strength training. A lot of girls play sports with their legs, it’s almost always soccer or running, and getting into the gym can be threatening for them,” he said. “Especially as you get older you develop (osteoporosis) and that sort of thing. You should have strength training and weight-bearing exercise so the bones keep strong. They get very spongy and soft if you don’t put weight-bearing exercise on them.”