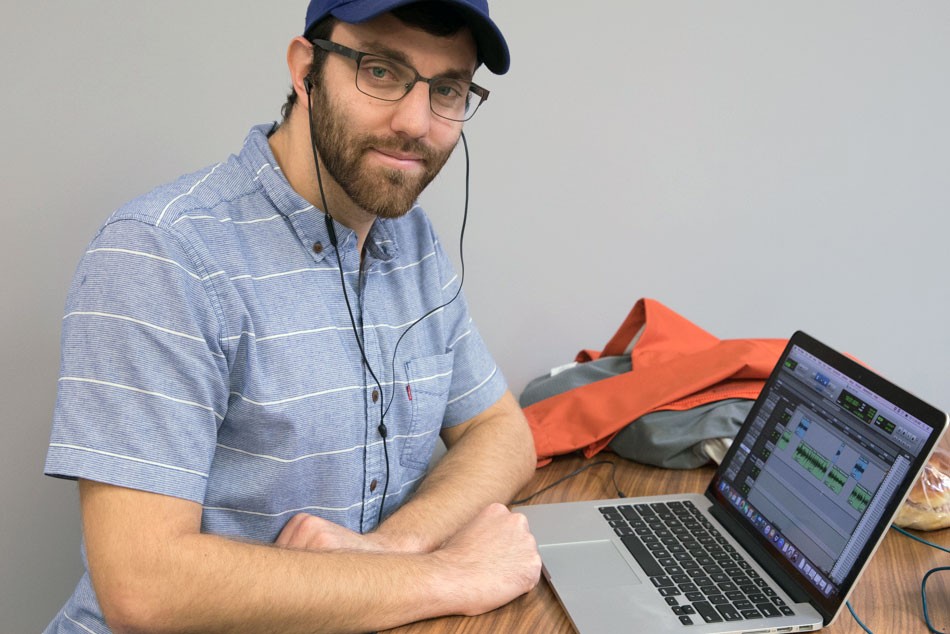 Don’t worry about finding the answers, a wise man once said. It’s more important to live the questions.

American freelance journalist Justin Regan set out to do just that when he quit his job in public radio 18 months ago to embark on an ambitious road trip across the United States with the goal of interviewing a rabbi in each state.

Regan, 27, was in the area during the High Holiday period when the HJN encountered him at JHamilton working on his podcast, The American Rabbi Project. A frequent visitor to the city, where his girlfriend works in the Jewish community, Regan told the HJN that his podcast came about as a result of his seeking to understand “the beautiful complexities of American Judaism.”

Raised in an interfaith family—his mother is Jewish and his father, Catholic —Regan sees himself as a product of the Jewish American life he is so driven to understand. As a child, he received a nominal Jewish education, but dropped out of Hebrew school just before the bar mitzvah program. In high school and college however, Regan increasingly began to embrace his Jewish identity.

“I’ve been growing my Judaism for many years now,” he said. “So in a way, this project is also a way for me to connect and learn.”

Regan’s premise going into his project was that Jewish practice in America is distinct from any other time or place. “There’s something about the United States that’s different from the traditional Jewish narrative,” he said. “It seems that this is a place of safety, where we can be whatever we want to be, but at the same time, there’s more possibility of people losing touch with their Judaism. These are the types of questions I have and wanted to learn more about, and I figured one way to do that was to talk to people from a wide variety of backgrounds and denominations.”

The American Rabbi Project’s first season features interviews with Orthodox, Conservative, Reform and Renewal rabbis in the Southwest, New England and Washington, D.C. Three of the nine rabbis are women. Regan’s first interview was with the Chabad rabbi he befriended during his student days at the University of Arizona. He chose his other subjects based on their online footprint or unique circumstances, such as the Salt Lake City rabbi who conducts both Conservative and Reform services in a single merged congregation or the prominent Washington, D.C. rabbi who once studied Torah with President Barack Obama and whose 2014 letter informing his congregation that he was gay went viral.

Some episodes contain particularly insightful sound bites, such as the observation made by a Vermont-based Renewal rabbi that “in America every Jew is a Jew by choice” or  a Massachusetts-based activist Reform rabbi who stated  that to be a Jew in America today is to “hold with great tenderness our own history of being a persecuted minority and stand shoulder to shoulder with the folks that are currently being targeted.”

The second season opens with Regan’s interview with an Orthodox rabbi who found his calling presiding over a tiny Conservative congregation in Appalachian West Virginia. A comic book enthusiast who finds inspiration in the moral messages of Superman and Batman’s Jewish creators, this rabbi talked about the importance of “weaponizing goodness” in the wake of the Pittsburgh synagogue shooting, “by speaking out, speaking up and doing good.” But Regan’s personal reflections make this episode particularly poignant.

After staying with friends and family in the Philadelphia area, Regan entered a three-week period he describes as the hardest part of the road trip. It was November 2018 and Regan was alone and tired of travelling. A month had passed since the Tree of Life synagogue shooting in Pittsburgh and he was reeling from news of a mass shooting in his hometown of Thousand Oaks, California, followed less than 24 hours later by the eruption of the Woolsey Fire, which saw his parents and a good friend forced to evacuate their homes. Standing in the deserted downtown square of Charlottesville, Virginia, a few nights later, Regan stared up at the yellow tape-encased statue of Confederate general Robert E. Lee, the focal point of the 2017 white supremacist rally. He felt strangely comforted when he noticed chalk writing on the ground nearby that said, “We stand with Pittsburgh.”

“The energy seemed to have shifted,” Regan recalled thinking. That turned out to be the moment when Regan recognized that, were it not for his project, “West Virginia would have been the beginning of the end.” Instead, his podcast was beginning to mean much more to him than he ever would have imagined at the outset of what his adventures.

The American Rabbi Project podcast can be found wherever you get your podcasts or at rabbiproject.com. Topics include interfaith marriage, religious observance, concerns over anti-Semitism, and the difficult balance of being Jewish and American.