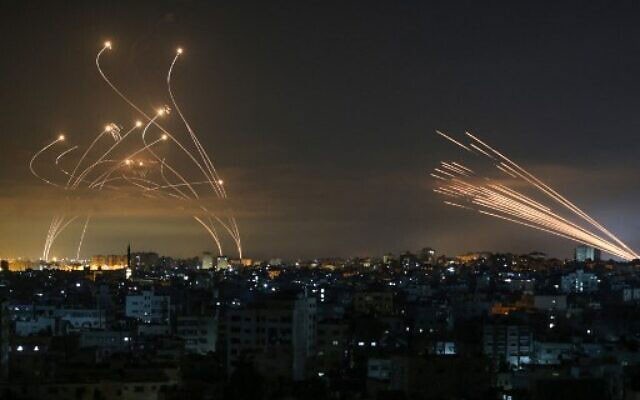 Hamilton police were on high alert around Jewish facilities on the weekend as thousands of pro-Palestinian demonstrators poured into the streets.

Unlike the protests at Toronto’s Nathan Philips Square where a Jewish man and woman were assaulted, however, the Hamilton incidents resulted in one driving charge and 14 charges for violating COVID-19 regulations.

In the most serious incident, at a small anti-Israel rally Friday afternoon in the plaza in front of Hamilton city hall, a 17-year-old from Quebec was arrested and charged with dangerous operation of a motor vehicle.

Police did not release details of the allegation, but said in a later email no one was injured in the incident and said in a news release the matter remains under investigation.

In a news release police added that because of the large attendance at that event they are continuing to review evidence and more charges may be possible.

The Friday incident occurred as the Hamilton community prepared for an online prayer rally organizers hoped would ease the tension of a week in which Israel endured days of rocket attacks from the Hamas terrorist organization in Gaza and community endured days of social and traditional media misinformation about the conflict.
The event was organized by the Hamilton Jewish Federation.

“This isn’t about money or our campaign or anything else,” Federation CEO Gustavo Rymberg said in an interview before the event. “It is a moment for us to be together and pray and feel better. It isn’t about sending money, it’s about knowing we are together.”

Rymberg said the Jewish community has been especially troubled by the torrent of misinformation and lies being spread on social media, and a perceived lack of support from established media which appears to see the Middle East trauma only as abuses of Palestinian human rights by Israel.\ while ignoring terrorist rocket attacks on Israeli civilians.
“Something really terrible is happening on social media and that’s creating anxiety, confusion and fear in the community,” he said. “The media is not talking about the other 50 per cent of the story, and it’s important to tell both sides of this story.”

Rabbi Jordan Cohen, of Temple Anshe Sholom (Reform) said in an interview before the event said a community event is especially important in the current COVID-19 crisis when communities are being forced apart.

“Adding our voices together in prayer brings a great sense of connectedness and community and the opportunity to express the hopes and fears and trepidation and the desire of the community in response to such an event,” he said.
Such an effort, he added, is even more important “When there is so much gross misinformation circulating around about what is going on. Usually I’m not as manifestly shocked at the media and their presentation of events, but the fact they are so getting it wrong this time is hard to accept.”

At the prayer event, Centre for Israel and Jewish Affairs CEO Shimon Fogel said the broader community has to learn the truth about ongoing periods of violence in the Middle East.

“This is not a cycle of violence that has no beginning or end,” he said. “This has a clear genesis in an Islamist effort to destroy Israel.

“We have to do what we can to ensure the narrative reflects a truthful view of what is happening, especially when some people are being seduced by the language of human rights abuses” he added.

“Attacking Israeli civilians by using Palestinian civilians as human shields is a war crime,” she said. “We have to be very clear about that.”

“No country in the world would tolerate these attacks,” she added. “Israel will not allow these hooligans to tear apart the tapestry of our society.”

Hamilton three congregational rabbis tapped into Jewish sacred learning to find the words that would ease a community’s suffering.

Rabbi Daniel Green, of Adas Israel Congregation (Orthodox), drew on the plea expressed in Psalm 140, beseeching God to “rescue me from depraved people and protect me from men of violence who develop evil plans and stir up war every day.”

Rabbi Hillel Lavery-Yisraeli, of the Conservative Beth Jacob Synagogue, invoked blessings for the soldiers of Israel: “May God cause the enemies who try to attack us to be defeated by (Israel’s defenders). Foil the plans of those who hate us and crown our soldiers with deliverance and victory.”