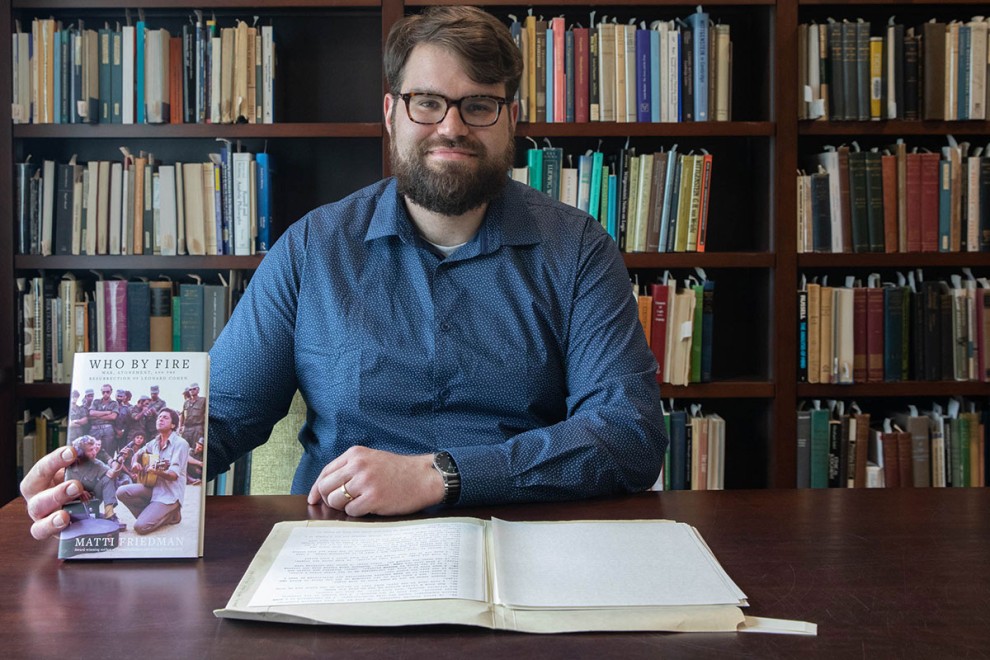 A McMaster University librarian played a critical role in the discovery of an obscure Leonard Cohen manuscript that would form the basis of a new book about Cohen’s experiences during the Yom Kippur War.

The story begins in the summer of 2019 with an email exchange between Canadian Israeli journalist Matti Friedman and McMaster’s archives arrangement and description librarian, Chris Long, about an obscure Cohen manuscript Friedman thought might be part of the university’s McClelland and Stewart Archive.

When the email exchange occurred, Matti Friedman was deep into researching the story of Leonard Cohen’s sudden appearance in the Sinai desert in the opening weeks of the Yom Kippur War.

Friedman had started thinking about the subject in 2009, when Leonard Cohen performed what would be his final concert in Israel. “At that time, I was just shocked how excited Israelis were that Cohen was here,” Friedman told the HJN, until coming across an article in an Israeli newspaper about Cohen’s showing up during Israel’s darkest hour. “Israelis never forgot it.”

Friedman would eventually track down Israelis who were at a series of impromptu concerts Cohen performed during the chaotic opening days of the war. “I had the memories of Israelis who saw Cohen,” Friedman says. “Soldiers who were at the front. I had memories of musicians who travelled with Cohen. I had some of Cohen’s songs that echoed this experience.” What he didn’t have was an account from the man himself.

“Cohen never seems to have mentioned it afterwards,” said Friedman. “It was clearly a difficult experience for him, and yet, I didn’t have his own words about what had happened, and that was obviously a gaping hole at the centre of my book project.”

When Friedman reached out to Long that day, he was following up on a footnote in a 1990s Cohen biography that referred to a manuscript in the university’s McCLelland and Stewart archive. It felt like a shot in the dark, which turned out to be the case. For Long was unable to find any mention of the manuscript at first, and it was only on further investigation that he found the mystery manuscript in a box in an off-site storage facility in Dundas.

“I was astounded by it,” Long, a long-time Leonard Cohen fan, told the HJN, recalling the moment he first laid eyes on the 44-page typewritten document that he immediately scanned and forwarded to Friedman. Friedman was just as excited. “He said very pointedly that the document was fascinating, that it would be very significant to his research and that it was real and raw Leonard Cohen … that was very exciting for us,” Long says.

Friedman told the HJN that finding the manuscript felt “like striking gold.” “I hadn’t been sure that this manuscript even existed or that it could be found. And then, suddenly, there it was,” he says. “I opened it and realized what I was seeing, which was exactly what I was looking for. That doesn’t happen a lot in journalism that you get exactly what you were looking for. But here was Cohen in the first person telling us not only what had happened in kind of journalistic language, but also what it felt like in very Cohenesque, often very difficult, sometimes obscene, but always interesting prose.”

When Friedman’s book, Who by Fire, Leonard Cohen in the Sinai came out last March, Chris Long heard from his Jewish mother-in-law, who had read a review that mentioned a cardboard box in Hamilton being an important part of Friedman’s research.

When he finally got his hands on a copy of Friedman’s book, Long was delighted to see passages from the manuscript quoted “quite liberally” throughout the book. “It’s really incredible that essentially, a single document could have such an impact on the final story.” Long says that his department completes research requests for researchers around the world every day, with its material often ending up in books, papers and films. “But it’s a rare thing when kind of a single discovery can be such a significant aspect of the final story. So that was very cool,” he says.

Matti Friedman never got to interview Leonard Cohen, although he came close. In November 2016, he pitched his book idea to his editor surmising from a New Yorker interview with Cohen that the singer was in ill health. When his editor said he’d sent Friedman’s proposal to Cohen’s people, Friedman had visions of sitting in Cohen’s living room within weeks. Alas, the following day, his editor sent him an email with the subject line, “holy s**t” and a link to Cohen’s obituary.

“I was pretty bummed out and I actually didn’t do much with the book for a while after that,” he says. Today, he sees it differently. “I think that fate decided to make it up to me in the form of Chris Long and McMaster because if I couldn’t have Cohen in person, than a pretty good alternative is a Cohen manuscript, and in fact, in retrospect, if I had to choose between interviewing the elderly Leonard Cohen about this and 45 typewritten pages of raw Cohen written immediately after the war, there’s no doubt that, journalistically, the manuscript would be the thing to choose. So I’m not angry at fate. I think that on balance I did okay.”

The Shpiel on Hamilton's interview with Chris Long and Matti Friedman