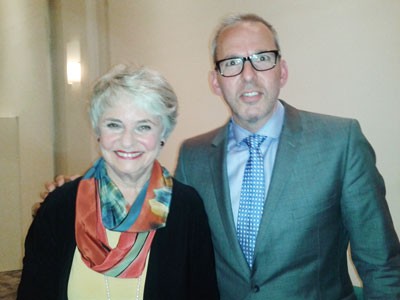 To the question of: “Are Liberal Jews Trapped by Their Own Ideology?”, Barbara Kay, National Post columnist, began her address by answering the talk’s title: “yes.”

She was later joined in conversation with her son, Jonathan Kay, editor of The Walrus magazine.

She began her address by describing a poster circulating on American campuses, derived from the neo-Nazi website Daily Stormer, that explicitly blamed Jews for “destroying your country through mass immigration and degeneracy”.

“If I had seen that poster in my youth, it would have felt like a punch to the gut. Objectively, I should still be sickened. But the world has changed a lot since I was young and naively swaddled in the belief that anti-Semitism had finally been vanquished,” she said, noting that those with “genocidal dreams” today are plentiful.

“This time around, a sizable number of our Jewish intelligentsia think the way that hate is framed in modern times — as Israel cleansing, rather than racial cleansing — is kind of cool.”

Among those intelligentsia, she cited Michael Neumann, a professor of philosophy at Trent University in Peterborough, Ont., who claims in a 2003 blog post: “If an effective strategy means encouraging reasonable anti-Semitism, or reasonable hostility to Jews, I also don’t care. If it means encouraging vicious racist anti-Semitism, or the destruction of the state of Israel, I still don’t care.”

Professors such as these have “unprecedented access” to “masses of vulnerable minds in an environment virtually cleansed of pro-Israel voices,” said Barbara.

It is especially troubling because campus “is influential in society. It creates leaders of tomorrow.”

University students are “indoctrinated into reflexive anti-Israel mindset,” she said, while BDS is a “long game” that isn’t necessarily concerned with the economic crippling of Israel; rather, convincing the populace of Israel’s evils.
“BDS Jews are unappeasable, because they want Israel not to be there altogether.”

Barbara noted, “[T]he vitriol, the irrationality, the delirium of anti-Zionist loathing … [is] more ferocious, more structured and better funded than at any other time in Jewish history.”

Israel supporters, meanwhile, have not been truly successful in educating the public, she said. When PEN Canada invited Max Blumenthal to speak, for example, Barbara asked the organization whether they were aware of his notorious criticism against Israel. Their response, she said, was tantamount to a shrug — she was told he was “mainstream.”

After concluding her remarks, Jonathan chided Barbara for using “epithets” to describe Jewish anti-Zionists, among them: “pathological altruists”, exterminationist, Jewdiots (Jewish idiots), fifth columnists, and comparing them to those who indulge in honour killings.

After Jonathan noted that “exterminationist” sounded equivalent to the Holocaust’s final solution, Barbara conceded, switching the term to “eliminationist” to denote the elimination of Israel.

Taking issue with her description of Jewish BDSers as “enemies of the Jewish people”, Jonathan asked whether it would be more intellectually honest to label them “ignorant or naïve,” but Barbara disagreed.

“There’s a big difference between free speech and blood libels,” she said. “Tolerating hate is not a luxury.”
Jonathan downplayed the threat of BDS, the anti-Israel left, anti-Israel reporting, and campus rhetoric, contending Barbara cherry-picked from dated examples.

“I’ve been reporting on this for years,” he said, referring to his previous employment as Editorials Editor of the National Post. To his eyes, the anti-Israel left is comprised of splintered groups, “with 17 people in them.”
“I don’t know why the Jewish community isn’t giving itself a collective high five,” for outnumbering and outdoing, these groups.

On the topic of skewed reporting on Israel, he added, it was “so fifteen years ago; when I first began in journalism… They (pro-Israel camp) pretend they’re still in the Chrétien time warp.”

Why anti-Zionists appear to be so vocal is because “we give them attention; we make them the centre of attention.”
One example he offered was accentuating the scuffles on campus – “like (pointing to) a YouTube video from five years ago” at York University.

“People will say ‘My God, that’s the only reality at York!’ It’s not like Kristallnacht,” he asserted. “It’s a slur against Canadian universities.”

Though there was little daylight between the two Kays, the questions taken from the audience reflected agreement with Barbara.