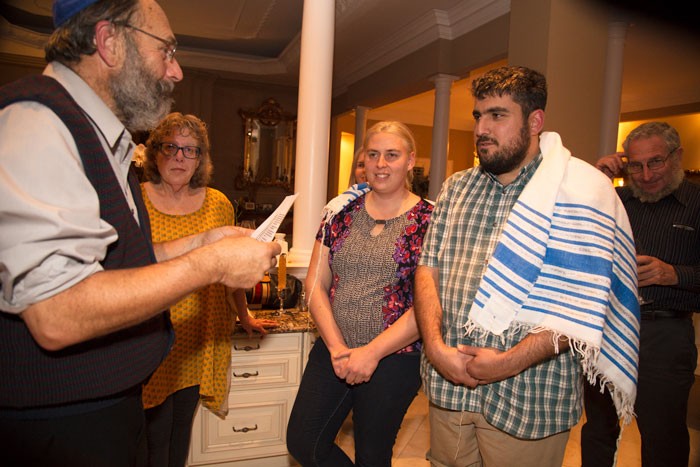 Two thousand years of exile is finally coming to an end for a flock of 119 Jacob sheep. The flock, which was quarantined by the Canadian government for six weeks in a barn in Copetown, was recently determined to be in perfect health and fit for travel to Israel.

Jacob sheep are a very rare and ancient breed, believed to be descended from the sheep described in the book of Genesis. These are the spotted and speckled sheep that the patriarch Jacob was paid for his many years of work for his father-in-law Laban. References to the sheep appear repeatedly in the biblical narrative as well as in several prophetic writings. Following the destruction of the Judean state by the Romans during the first and second century C.E. the sheep followed the Judean refugees into this long and difficult exile.

These will be the first Jacob sheep to graze the hills of Israel in several millennia. The idea to bring the sheep home to Israel was the brainchild of Gil and Jenna Lewinsky. Living in rural Abbortsford, B.C. at the time, they spotted a small flock of sheep in a field and immediately recognized them as the sheep described in Genesis. They checked with the farmer who owned them and he affirmed that they were, in fact, Jacob Sheep — and that they were destined for the slaughterhouse.

One thing led to another. They bought the sheep, bred them and bought others until the flock numbered 119.

The Jacob sheep arrived in Copetown during the last week in August. Exporting and importing livestock is not a simple matter. Making flight arrangements, overcoming endless restrictions regulating transportation of live animals across international boundaries, getting veterinarians on both sides of the ocean to agree on establishing new protocols, finding appropriate facilities to receive the sheep in Israel, one might think this would turn out to be impossible.

The Lewinskys were faced with a myriad of challenges to overcome in dealing with complex bureaucratic obstacles both in Canada and in Israel. As well, they were faced with raising the funds required to pay for local barn rental, food for the sheep, medical costs related to the quarantine and the truck and air transportation costs to fly the sheep, the dogs and the people to their destination in Israel. Additional costs in Israel such as customs duty, Israeli quarantines, transportation costs, fencing etc. only added to the number of hurdles to be overcome in bringing these precious animals home.

Thankfully, a group of volunteers came forward to assist them in all of these matters. The dollars were raised from Jewish donors as well as from many Christian friends. Local farmers stepped up to help with the feeding, watering and other animal maintenance matters. A local physician, who was a real hero to the project, stepped up and volunteered to perform or supervise all of the required medical interventions including inoculations for every sheep, to meet quarantine and export regulations.

Luckily, the project is fully endorsed by the government of Israel. The Israeli ambassador to Canada, Rafael Barak, who attended a reception in the sheep’s honour on Labor Day at the barn where the sheep were being kept, has proven to be extremely helpful in dealing with much of the bureaucratic red tape on the Israeli side.

With most of the challenges behind them, Gil and Jenna left for Israel on Nov. 8 to ensure that all the arrangements were in place to provide the sheep with a “soft landing” in Israel. A group of Jewish and Christian supporters came together on Nov. 6 to perform a Havdalah service together and to wish a “nesyiah tovah” to the two shepherds. It was a very touching moment for everyone who has been working so hard to make the project a success.

However, the greatest moment of this entire journey took place on November 29th — the day that the first group of sheep left Canada for Israel. There were only a few people at the barn that morning. But they were witnesses to what seemed to many to be a genuine miracle.

These little animals, each with such a quiet dignity, were finally released from their pens and led on to the truck that took them to the airport. Their next step on the ground would be on the soil of Israel — the first time that has happened in many hundreds — if not thousands of years.

For our Christian friends, this moment was filled with profound meaning. The return of the sheep is a part of their understanding of the  “restoration of Israel,” a required precursor to the return of their messiah.

For the Jewish participants, the moment held a different meaning. For some, it was akin to participating in the return of the American Buffalo. For others, there was a deep and shared sense that something was becoming “a little more right — with the world,with Israel, and with ourselves for helping to make this moment happen.

Regardless of how you understood it, if you were there, you had a tear in your eye and a genuine sense of joy in your heart to see these lovely little souls move on to meet their destiny in Israel.

For more information about the Jacob sheep or to support their transition into Israel, please visit their website at www.friendsofthejacobsheep.com.