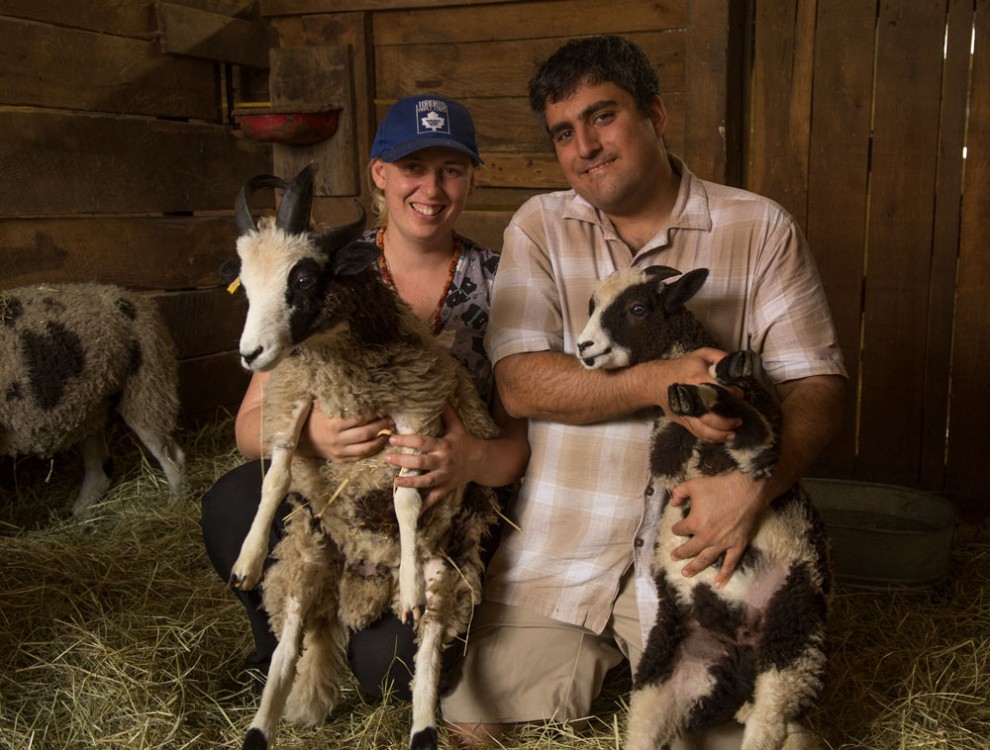 Hamilton is the final stop on what has been an epic journey undertaken by a Canadian Israeli and his South African-born wife, who are making aliyah next month together with their flock of 120 Jacob sheep. The journey began two years ago when Gil and Jenna Lewinsky, then living in Abbotsford, B.C., serendipitously came into the possession of four Jacob sheep, whose origins date back to biblical times.

Jacob sheep are characterized by their unusual colouring—white with black or brown colored patches, their goat-like appearance based on the fact that both sexes are horned and black knee bands. The ancient breed acquired its name from a story in the book of Genesis in which our forefather Jacob acquired the “spotted and speckled” sheep as wages from his father-in-law Laban. Their history mirrors the history of the Jewish people, who were exiled from their homeland during the Babylonian exile and scattered among the nations of the earth. The UK-based Jacob Sheep Society has the descendants of the original Jacob sheep being brought from the Middle East by the Moors into Spain and from where they were imported into Elizabethan England as an ornament to country house parks. Eventually, some were imported into North America. Of the remaining couple of thousand purebred Jacob sheep in the world, none are to be found in Israel. Once the Lewinskys understood the significance of their newly acquired sheep, they were determined to change that.

David Ben Gurion once said that in Israel, in order to be a realist you must believe in miracles. The Lewinskys are not religious in the traditional sense, but both Gil and Jenna see their success at rescuing more than a hundred Jacob sheep from certain slaughter, at finding facilities for their growing flock, at finding funding to keep them going and overcoming seemingly insurmountable bureaucratic obstacles in mystical terms. “You will not understand how things happened with these sheep if you do not have faith in God because of the miracles that have taken place,” said Gil.

Miracles, for instance, like the Israeli Ministry of Agriculture and Rural Development doing a complete turnaround after first refusing the sheep entry into the country due to there being no livestock import agreement between Canada and Israel. But last May the Canadian government’s Food Inspection Agency and the Israel Ministry of Agriculture and Rural Development decided that, on a one-time basis, they’d allow the importation of live sheep to Israel, a change of stance most likely brought about by the influence of Israel’s ambassador to Canada, Rafael Barak, who has said that it’s his own personal mission to see the Jacob Sheep repatriated to Israel.
“We’re opening up future Israel Canadian trade,” said Gil optimistically, saying he can envision a time when herds of cattle, sheep, and horses regularly go between Canada and Israel.

As word began spreading in Israel about the sheep’s upcoming “baaliyah” more miracles came their way. El Al, Israel’s national airline, offered to charter a specially outfitted flight on September 4 to transport the animals and pay 90 per cent of the cost; and the Mayor of Katzrin offered the Lewinskys a tract of land in the Golan Heights for a future heritage park in which the sheep will be a major tourist attraction.

How the Lewinskys came to spend their last days in Canada here in the Hamilton area is yet another example of serendipity at play. The story begins two months ago when they were contacted by former Hamiltonian and current resident of Vancouver Island, Elizabeth Gelb (known to many in this area as Liz Randor.)

“She called us out of the blue when she saw our story online,” said Jenna, “So she came to see the sheep. She was so impressed by what she saw that she became our donor relations person.”

When Gelb heard that the Lewinskys were searching for a facility to rent in Southern Ontario for the four-week quarantine period leading up to their departure, she asked her friend, local dairy farmer David Loewith, if he knew of anything in the area. When his efforts turned up nothing, the Lewinskys ended up finding a facility on Kijiji, that turned out to be located just a few short kilometres from the Loewith farm. The Loewiths immediately extended an invitation to the Lewinskys to spend the next month living on their property, rather than at a motel in Burlington, which was their initial plan.

The visitor, on being ushered into a stall containing a number of Jacob sheep, is immediately charmed by the friendly stares her presence provokes. Jacob Sheep, explains Jenna, are known for their curiosity and intelligence, as well as the heart-opening effect they have on the people who meet them.

As the only animals ever to be granted the right of return by the Israeli government, they’re bound to have the same effect in their new country.

“It’s the Zionist dream,” said Gil, “the sheep, like the Jewish people, are returning home.”

If you'd like to help the Jacob Sheep get to Israel, click here to donate.  The sheep are currently in a protected facility for export. To arrange a tour, email friendsofthejacobsheep@gmail.com